WA 38, developed by the Washington State University apple breeding program, is a fast-emerging variety. Washington growers have already planted nearly 7 million cv. WA 38 trees between 2017 and 2018 (Dininny, S., 2018), with an estimated 2.2 million boxes expected to be on the market in 2020 (Herrick, C., 2018). The first commercial harvest is approaching in 2019, so there is a need for a variety-specific starch scale to ensure picking of fruit at adequate maturity and to enable informed harvest decisions. Correct decisions will maintain product quality, enhance consumer satisfaction and ensure a return on investment for Washington State apple growers and the entire industry.

During fruit growth, sugars produced via photosynthesis in the leaves of apple trees are stored as starch in developing fruitlets. With the onset of the maturation process of the apple fruit, starch is slowly converted back to sugar. This process is visualized when using the iodine starch test as a maturity indicator. The method has been widely used for over 200 years, but the chemical structure of the starch-iodine complex, that causes the deep blue color, was only discovered in 2016 (Madhu et al., 2016). Each apple variety has a unique starch staining pattern and the speed of disappearance of the staining varies. Around the world, each growing region has adopted their own specific starch scale. For example, most of the growers in the eastern United States use a 1-8 scale (aka Cornell starch scale), German growers utilize a 1-10 scale, and apple producers in South Tyrol rely on a 1-5 chart. In Washington, a 1-6 scale is typically used. All scales commonly gauge the percentage of staining in two regions of the fruit: the core and the flesh area. Variety-specific starch scales are available and widely-used by Washington growers.

WA 38 fruit were harvested from four different locations: Prosser (WSU Roza Orchard), Prosser (grower-cooperator test orchard), Quincy (grower-cooperator test orchard, and Rock Island (WSU Sunrise Research Orchard). Fruit were sampled in the orchard before and during the actual harvest period from September 20th– October 10th, 2018. After harvest, some of the fruit was stored at 33°F. In mid-November, a sample of 40 fruit was moved to room temperature to advance maturity. Apples were prepared and pictures taken between 10/1/2018 and 12/06/2018.

We have used a focus group (fieldmen, QC personnel, R&D, scientists) to gather feedback during various stages of the starch scale development process and to determine the best potential layout options.

Typically, the center of the apple core is located above the middle of the fruit. To achieve a surface accurately representing the middle of the core, WA 38 apples were cut, unlike other varieties, right through the equator and the surface was scraped with a knife to have a clean pattern (Figure 2). During the experiment, two predominant patterns were observed. The first was named “flower” pattern (Figure 3) and is characterized by five “flower petals” growing with advancing maturity. The other pattern was named “radial” pattern (Figure 4) and resembles a sunrise. The radial pattern clears larger parts of the cut surface in a radial fashion with advanced maturity. The patterns appeared in a 6:4 ratio in 2017 (6 = flower, 4 = radial) and in a 3:7 ratio in 2018 (3 = flower, 7 = radial).

Another observation was the slow disappearance (aka slow fruit ripening) of dark color and consequently starch when fruit matured on the tree. For example, little movement of starch between two picks was observed when harvested six or seven days apart (Figure 5). This was similar to observations from previous years with cv. WA 38 apples at the WTFRC (see last year’s article at http://treefruit.wsu.edu/article/developing-a-cv-wa-38-starch-scale-for-wa-state-apple-industry/). In the new starch scale, slow fruit ripening was considered and a scale with half-point increments was developed.

Starch patterns also took longer to fully develop the typical dark blue stain than other important varieties. While initial coloration for WA 38 occurs in less than 5 minutes, depending on fruit temperature and maturity, the development of complete starch staining took up to one hour. In most cases, the pattern developed fully after 30 minutes, if the fruit was warm (72°F), and 50-60 minutes, if the fruit came from cold storage (Figure 6). In comparison, Granny Smith developed a full dark stain in up to 10 minutes, when the fruit came from cold storage and 2.5 minutes, when the fruit was warm (72°F) (Figure 7).

WA 38 fruit, in general, ripens more uniformly on the tree than other varieties. For example, we compared the starch degradation pattern of Honeycrisp apples with WA 38 apples. In 2018, after one day of harvest on August 29th, we stained homogenous Honeycrisp apples, and observed that there were different stages of maturity among the group of apples. In comparison, WA 38 within four days of harvest on October 16th of 2016, showed an even maturity among all fruit (Figure 8).

We have observed, that sometimes the starch clearance pattern is not symmetric, showing more maturity on one side of the cut. We thought it might be related to sun exposure, since in general, apple fruit show advanced maturity (starch clearing) on the sun-exposed side of the fruit. For WA 38 we could not attribute uneven starch clearing patterns to differences in sun exposure.

We have also been observing starch movement through the vertical cut. Starch in the stem bowl cleared ahead of the remainder of the fruit, similar to Gala. The calyx end has delayed starch clearance compared to the stem end and the core. In contrast, Granny Smith matures from the core out (Figure 10). We hypothesize that the timing of the vertical starch pattern clearance in the stem bowl may predict the overall likelihood of splits in the stem bowl. However, to test this hypothesis more data needs to be gathered and analyzed.

To develop further information, we have been evaluating the starch degradation of WA 38 fruit over an 8-week storage period in a cold room at 36°F. We have observed that starch in WA 38 fruit had not completely degraded after 5 to 7 weeks in cold storage at 36°F (Figure 11).  It is important to consider sufficient starch clearing, to ensure optimum eating quality, when first shipping fruit.

Starting in spring 2019 we will have the following products available at no cost for the industry (mid-May): 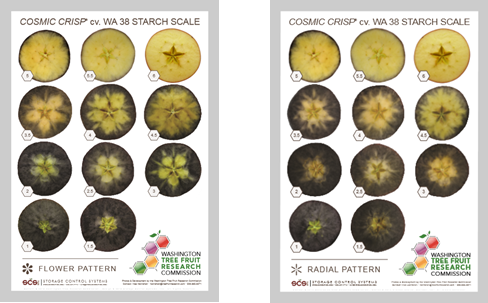 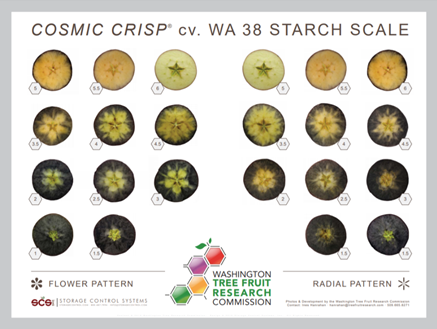 You can download and print copies of all material: http://treefruit.wsu.edu/wa38-starch-scale/

Printed sets will be available at WSU Field Days and in the Yakima and Wenatchee WTFRC offices. They can be requested from Mackenzie Perrault (mackenziep@treefruitresearch.com).