During the 2022 pear growing season, our WSU pear entomology team monitored pear psylla and its natural enemies (predators and parasitoids) across orchards in the Wenatchee Valley. Orchards were either conventional, organic, or followed our new phenology-based Integrated Pest Management (IPM) program (detailed in this link: http://treefruit.wsu.edu/crop-protection/psylla-phenology-model). All programs experienced highs and lows in terms of pear psylla. Conventional had great control of pear psylla during summer. However, as harvest approached, the elimination of natural enemies resulted in pear psylla nymph populations dramatically increasing (Figure 1). Meanwhile, in organic and IPM orchards, natural enemy populations increased and kept pear psylla nymph abundance lower than in conventional orchards (Figure 1). These differing scenarios meant a tradeoff between early-season damage in IPM and organic orchards vs. a sticky harvest and the risk of late-season damage in conventional orchards. We evaluated damage in the field, and pear psylla marking downgrades averaged out to be similar between IPM and conventional orchards.

But what happens after harvest with pear psylla?

This is where the greatest opportunity exists to change the narrative with pear psylla in the Wenatchee Valley. 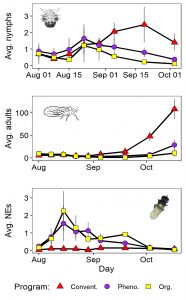 Figure 1: Summary graphs of the average number of pear psylla nymphs, adults, and natural enemies from the beginning of August until mid-October at fields that practiced conventional, IPM (“Pheno” = phenology-based IPM guidelines), and organic psylla management.

These differences are important. Winterform adult pear psylla will mix over the winter and reinfest orchards in the spring. The pear psylla building up in conventional orchards during the fall is what leads to high pressure the following year.

Because pear psylla from everyone’s orchards mix at the end of the season, it is time to recognize the importance of psylla populations after harvest and what must be done to keep these populations low. The answer is not a fall spray, it is even easier: IPM or organic strategies that support natural enemies during the season will keep the overwintering pear psylla population low for free. Although one IPM or organic pear orchard amongst many is unlikely to make a difference in the region, widespread adoption of IPM will make it easier to control pear psylla the following year. The IPM and organic programs are not perfect, but neither are the conventional programs. A transition away from reliance on broad-spectrum sprays can be difficult in the first couple of years, but if everyone is on board, our overall ability to control psylla will get much easier and cheaper due to lower areawide pressure, starting in the spring.

As an industry, we think about working together to make our lives easier, in the long run, to keep the pear industry competitive and profitable. The IPM guidelines developed at WSU require some tolerance of pear psylla in the middle of summer, but we have found this year that IPM is, on average, effective in year one of transition. We expect even better outcomes in year two and beyond as predators and parasitoids have a chance to build in the orchard. 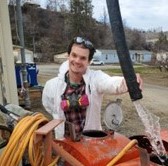 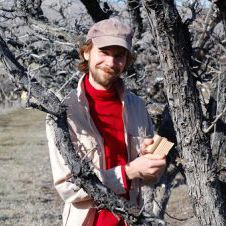 Thank you to our funding sources for this project, the Fresh and Processed Pear Committee of the Washington Tree Fruit Research Commission and the Washington State Department of Agriculture Specialty Crop Block Grant Program.