Green spot (GS) in ‘WA 38’ cultivar is a disorder shown as dark green halos in fruit epidermis, with necrotic, corky, and oxidated cortical tissue in the flesh that leads to unmarketable fruit. The disorder has been observed in young and mature orchards exhibiting up to 60% incidence in 2020 in whole tree analysis.  Assessment of culls in the first commercial packing of ‘WA 38’, Torres and Gomez (2020) reported that GS was rated within the top three cullage categories, accounting for ≈12.4% ± 8% in 4-year-old orchards and 13.9% ± 6.9% in 3-year-old orchards.

Many physiological disorders in apple have been associated directly or indirectly with Ca deficiency (Faust and Shear, 1968). Bitter pit (BP) is one of the most common Ca-related disorders in apples worldwide, and has been extensively investigated (Faust and Shear, 1968; Ferguson et al., 1979; Ferguson and Watkins, 1989; Perring, 1986; Shear, 1975). The primary cause(s) of BP remain unknown; however, there is general agreement on the role of Ca deficiency at a cellular level, and the influence of several orchard factors that may predispose fruit to developing BP (Bedford, 2001; De Freitas et al., 2010). Ca-related disorders are also strongly associated with the genotype (De Freitas et al., 2015; Miqueloto et al., 2014; Volz et al., 2006), with ‘Honeycrisp’ being among the most susceptible cultivars (Telias et al., 2006; Watkins et al., 2004). Thus, given the genetic background of ‘WA 38’, and the close resemblance of GS to BP, we sought to explore the nutritional composition of fruit with and without GS, and its relationship with Ca content and concentration.

Fruit load (fruit/tree) ranged between 51 and 67 across years and rootstocks. Fruit load was higher on ‘M.9’ compared with ‘G.41’ in both years (Table 1). Fruit weight ranged between 262 and 302 g, and according to Washington Apple Commission standards, these fruits correspond to a box size between 72 and 64. Fruit count, diameter, and weight are equivalent to those previously reported by Brendon et al. (2019) and Gomez and Kalcsits (2020) for ‘WA 38’ apples.

Fruit nutrient levels were significantly different in fruit with and without GS regardless of the year and rootstock (Table 2). The most consistent indicators of GS+ were higher N and Mg concentration in the peel and higher N:Ca ratios in the flesh and peel. The ratios (absolute values) were not consistent between years or rootstocks, suggesting it should not be used as an absolute indicator of fruit condition. For example, in 2018, the N:Ca ratio in the peel was 2.9 in GS+, whereas in 2019, the N:Ca ratio was 4.5 in GS+ and 3.5 in GS− fruit.

The relation between high N levels in the tree, leading to Ca-related disorders, has been reported extensively. Excessive vigor (normally associated with high levels of N) leads to rapid shoot growth, and the associated increased demand for water and transpiration flow, which comes at the detriment of Ca flow into the fruit (Ho and White, 2005). High levels of N have also been associated with greater cell expansion, which can lead to Ca dilution in the fruit and increased development of Ca-related disorders (Saure, 2005). And as reported by Shear (1975), Ca measurement alone is not a good predictor of BP in apples, despite it’s role in several physiological dissorders such as bitter pit (Baugher et al., 2017; Chamel and Bossy, 1981; Sallato et al., 2016). These lack of correlation between total Ca levels and Ca-related disorders relates to the many forms and functions of Ca in plants. Approximately 40% of the Ca in the fruit tissue is located in the vacuole, as an inactive form of Ca, with most of the remaining 60% located in the cell wall. When we evaluate total Ca in the tissue, we are not segregating between active forms of Ca that might be more closely related to the Ca-related disorders. In addition, Ca sprays used in the orchards to either augment Ca content in fruit or used to prevent sunburn damage can alter Ca readings, especially in the peel.

Green spot is a disorder that can lead to considerable losses for growers of ‘WA 38’ apples; we report here nearly half of the fruit being afflicted with GS in ‘G.41’ in a vigorous orchard. The 40-fold difference in GS levels between rootstocks correlated well with higher N, K, and Mg levels in the peel of GS+ fruit. Although all these growing factors are interconnected and difficult to isolate, it appears that the influence of rootstock on GS development is highly related to vigor and fruit to shoot relationships, similar to other Ca-related disorders like bitter pit (Ferguson and Watkins, 1992). De Freitas et al. (2015), in their extensive review on Ca-related disorders in apples, described the many factors that can lead to Ca-related disorders, many of those have also proven to be related to GS development in ‘WA 38’ in this study. 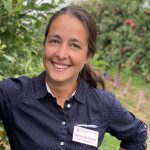