On April 12, 2022, WSU Matthew Whiting, Professor in the Horticulture Department, and Bernardita Sallato, WSU Tree Fruit Extension Specialist, hosted a meeting that brought the tree fruit industry together to discuss challenges and strategies to mitigate the impact of cold weather, wind and snow on fruit set. Here we summarized the main concerns and expand upon the key issues discussed.

Successful fruit set is dependent upon many separate steps functioning and occurring in proper sequence.  These include having pollen that is alive, compatible, and available; having that pollen transferred to the stigmatic surfaces of flowers (i.e., pollinator (bee) activity), having receptive stigmatic surfaces; having conditions favorable for pollen germination and growth; having sufficient duration of ovule viability that pollen tubes reach it before senescence.  Each of these steps is influenced by environmental conditions.  Generally, warm conditions accelerate each step (pollen germination, pollen tube growth, ovule senescence) and, in contrast, these processes are slower during cold conditions.  Windy conditions tend to reduce fruit set though dehydration of the stigmatic surfaces, rendering them less receptive.  In addition, microparticles in the wind can reduce fruit set from simply coating the stigmatic surfaces.  It is also likely that high winds will accelerate ovule senescence (though this is speculative).  High winds (15+ mph) will also reduce pollinator activity.

Cold temperatures can injure floral tissues at all stages of development when temperatures drop below the plant’s hardiness level. Jon Magby, a WSU PhD candidate shared hardiness values for sweet cherry between stages between 3 to 8 in four cultivars, predicting damage as high as 57% in ‘Regina’ should temperatures drop to 28F (Table 1). These data were collected April 8th and 10th at the WSU-Roza experimental farm (46.2924 °N, 119.7268°W). Pre-bud death (PBD) prior to spring analysis. LT50 and LT10 is the temperature at which 50% and 10% of buds die, respectively.  The additional columns (BAYSprob) are results of a predictive model for the % of floral initials that would be killed if air temperatures reach 28℉ to 25℉ (predicted low for much of the Yakima Valley). Magby noted that the PBD might overestimate the reality in a commercial orchard, because at the Roza farm there are no frost mitigation strategies.

In apples, hardiness levels will also depend on developmental stage, and temperatures below 28F can cause severe damage to tight cluster and open blossoms. Mark Longstroth, Michigan State University, has several extension publications that show how to assess cold damage in apple flowers and several other useful resources, click here for further review.

Q: What do we know about ovule longevity for cherry, apple, and pear in cold, wet conditions?

The effective pollination period refers to number of days for effective pollination (Williams 1965), which corresponds to the period of ovule longevity, starting with stigma receptivity, minus the period required for pollen germination and pollen tube growth to reach and fertilize the ovule. The EPP commonly ranges between 2 to 9 days in tree fruit and is highly dependent on temperature, site and cultivar (Sanzol and Herrero, 2001).

Low temperatures will prolong ovule viability and stigma receptivity, yet also slow pollen germination and pollen tube growth (Williams, 1970). Research shows that apple and sweet cherry pollen germination can occur with temperatures as low as 41 F (this is variable, depending on genotype), and will increase in rate with warmer temperatures to a maximum at about 77 F.  Similarly, pollen tube growth is slow at cool temperatures. According to Whiting and several participants in the call, low temperatures, provided they are not lethal, are beneficial for extending the EPP and reaching higher fruit set, thus low temperatures are not the greatest concern in regards to pollination (many growers report having unexpectedly high fruit set during cold springs).

According to many growers, a consequence of the temperatures this spring has been the separation of bloom time between pollinizers and main cultivars. Tim Pitz shared that their D’Anjous had blooms open for more days than normal before Bartlett flowers opened. Dave Gleason, also mentioned that pollinizer’s differences are more obvious during cooler conditions. In the WSU Roza farm, the pollinizer genotypes Snowdrift and Everest were at pink (stage 6) while the WA 38 is still at tight cluster (stage 5). If there is a lack of bloom overlap between pollinizers and the main cultivar, and pollinator activity is adequate, there are several approaches growers can take: 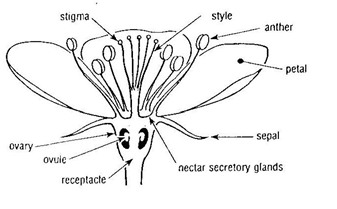 Figure 1. Diagram of an apple flower.

However, when conditions exist where flowering occurs without pollinator activity (as many growers described), there are few options.  Introducing alternative pollinators, those species that are more active than Apis mellifera at low temperatures is one option.  The other is artificial pollination.  In Whiting’s program this system has been evaluated and demonstrated effective.  It is not recommended however if daily temperatures never exceed 50 F (and warmer is better).

What is the impact of rain on fruit set?

Rain or any direct source of water in open blossoms will reduce pollen availability. Pollen grains in direct contact with water will hydrate and lose viability. Water droplets in receptive stigmas can also wash out pollen grains, with the consequently reduction on effective pollination.

Blossoms, or anthers in direct contact to snow, that eventually will melt, will have similar effect of rain, reducing pollen viability and availability. However, snow over buds or pre blossom stages will create an insulating layer, thus is preferred to leave intact rather than trying to blow away.

For the above process to occur, compatible pollen needs to be transported to the flowers. This is fundamental in self-incompatible species such as apples, pear and many sweet cherry cultivars, but also necessary in self-compatible species (e.g., ‘Sweetheart’, ‘Lapins’ sweet cherry cultivars). This process is mainly driven by bees, were Apis mellifera is the most commonly used pollinator in tree fruit. Wind is not an effective mean to transport pollen, according to Whiting, one should not expect more than 1 -2 % fruit set due to wind.

What is the impact of wind, cold temperatures and snow in pollinators?

The biggest concern that growers are having right now is the lack of bee activity in orchards, given the low temperatures and windy conditions (Figure 2).  Apis mellifera are active at temperatures above 55F, with reduced activity below this threshold and do not work under windy conditions (ca 15 mph). Mason bees can be active at temperatures of 45F according to Teah Smith, Entomologist. Similarly, native Bumble bees (Bombus sp.) are also effective at low temperatures. However, none will work in windy conditions. Poliana Francescatto (Valent Bioscience), commented on Bumble bees working in NY with temps between 40-50F. More information about pollinators can be found here and also in the extension publication blue orchard bees

What alternatives we have when pollinators are inactive?

All the challenges listed above regarding pollinator and pollinizers have driven Whiting’s program to research alternatives that don’t depend on both factors for successful fruit set, which resulted in the precision pollination system that consist of spraying compatible pollen in a suspension media that promotes pollen longevity and germination. There are commercial companies that will provide the pollen and suspension, and Whiting recommends applying with electrostatic sprayer. With this technology, bees do not need to transport or move the pollen, thus under low bee activity, spraying pollen can be a good solution. Minimum temperatures for effectiveness are not studied, but proposed to be ca. 50 F, however effectiveness will be higher at warmer temperatures. Several growers shared positive results from using this supplemental pollination approach when applied with electrostatic sprayers.

Use of wind machines was discussed. It is important to check with the wind machine companies with regards to the requirements or best management practices for effective use of wind machines for frost control (no company representatives were in the meeting). Wind machines work best when there is a temperature inversion, and/or in combination with under tree irrigation, or when there is any source of heat that needs to be distributed through the orchard. According to David Brown, buds do not experience wind chill and generally are colder that the air, thus moving the warmer air around the buds is beneficial. With no inversion, wind machines can bring cold air into the orchard, so it would be advisable to use temperature monitors to assess effectiveness. Wind machines should not be used in windy conditions, according to Tory Schmidt, several machines collapsed in the Wenatchee Valley when running under windy conditions.

Irrigation, overhead and under tree

Under tree irrigation is commonly used by growers for frost protection. Jason Matson added that for every gallon of water that freezes it releases 144 BTU per lb, but you need to keep watering to keep releasing that heat.

Whiting’s research team indicated that DiKap was effective in protecting buds from frost when evaluated in sweet cherries in a commercial orchard.  Whiting’s team has also been developing a frost protective treatment using plant-based dispersions (comprised of nanocrystalline cellulose) that have shown greater protective abilities than any other method, in field trials. This product is not yet commercially available.

Use of soil reflecting materials

Q: Normally we try to remove reflective fabrics (e.g., Extenday®) during bloom. Would it help to increase daytime temps and bee activity?

Whiting did not recommend using reflective materials during bloom.  There is increased frost risk and no physiological benefit.  It is recommended to deploy reflective after any risk of frost. In addition, reflective materials can prevent soil warming when deployed during early spring (bloom), delaying spring root growth and potentially affect nutrient uptake.

Use of plant growth regulators

The PGR ReTain® is applied during bloom in sweet cherry, and to a lesser extent in apples (we have new evidence that it is effective in apple), to delay senescence of the ovule (and it may extend receptivity of the stigma), thus extending the EPP and opportunity for pollination. Denny Hayden shared his farm’s common practice of using ReTain® in most sweet cherry cultivars, but particularly in those harder to set like ‘Early Robin’. There were questions about using ReTain® during the current weather conditions, and if it would be able to further extend EPP.  Poliana Francescatto, mentioned that ReTain® can still be effective at about 40F, and it is expected to extend in 2 to 3 days the EPP, however she advised that with low temperatures, there might not be a need to use PGRs, as low temperatures extend the EPP regardless, and that there is not transfer of pollen to the stigma. Denny added that their biggest concern was not the low temperatures but the high winds during bloom period, which certainly reduces stigma receptivity and bee activity.

Tory Schmidt, advised that this might be a year for concerned apple growers to ease off on bloom thinning sprays to give themselves more time to assess fruit set. Once they have a better picture, they can get aggressive with post bloom sprays if needed.

Protecting your fruit from frost and freeze http://treefruit.wsu.edu/?p=30510&preview=true