The walnut husk fly originated east of the Rocky Mountains. It was first reported in California in 1926 and by the 1950s had spread to the Pacific Northwest. It has become a serious mid- to late season pest of walnuts in the West. In Washington’s Yakima Valley, it occasionally attacks peaches grown close to walnuts.

The walnut husk fly’s primary host is walnuts, but it may also attack late maturing varieties of peaches near infested walnuts. Like the cherry fruit fly, the walnut husk fly remains on a single walnut tree or group of trees as long as there are plenty of nuts. It is a peach pest primarily in urban areas where peaches and walnuts are grown side by side, rather than in commercial orchards.

The egg is elongate, slightly curved and about 1/25 inch (1 mm) long. A freshly laid egg is pearly white. Shortly before hatching, the mouth hooks of the young larva can be seen.

The newly hatched larva is maggot-like and white except for its dark mouth parts. The larva turns yellow as it matures. It is about 1/2 inch long (13 mm) when mature. If a maggot is found in peach, it is probably walnut husk fly or Drosophila.

The pupa is straw colored with conspicuous dark brown anterior spiracles. It is the size and shape of a large grain of wheat.

The adult is about 1/4 inch (6 mm) long, slightly smaller than a housefly. It has large, iridescent, greenish eyes, a tawny brown body color and banded wings. It has a yellow spot on its back. Its conspicuous wing markings make it easy to identify. The female is larger than the male and its abdomen is more pointed. The biology, behavior and life history of the husk fly are similar to those of other tephritid fruit flies, such as apple maggot and cherry fruit fly. The husk fly produces one generation a year and overwinters as a pupa in the soil beneath the trees. Adults usually emerge from July until early September but sometimes as late as October. They mate about 8 days after emerging.

Egg laying begins anywhere from 2 to 6 weeks after the first emergence and continues until fall. The period before egg laying is much more variable than that of cherry fruit fly or apple maggot. Eggs are laid in groups of about 15 in a small cache beneath the fruit skin. Peaches are attacked when they are almost mature. Eggs hatch within 5 days. The white maggots feed inside the fruit for 3 to 5 weeks, depending on the temperature.

Mature larvae leave the fruit through a small exit hole or the hole through which the eggs were deposited, usually at the opposite end of the fruit from the stem. They drop to the ground and burrow into the soil to pupate. They remain in their pupal case for at least a year. Some remain in diapause for 2 years and a few even 3 or 4 years. 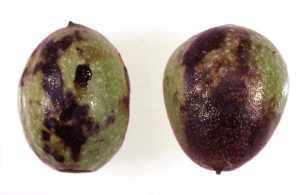 A yellow sticky trap developed to monitor apple maggot works well for walnut husk flies. A trap can be made from a piece of yellow cardboard, about 5-1/2 by 9 inches (14 by 23 cm), coated with Tanglefoot adhesive, and with a small bottle of ammonium carbonate attached to the bottom.

Yellow rectangle traps are not specific to husk fly and will catch many other flies. A more specific trap is a green sticky spherical trap the same size used to monitor apple maggot. However, the green sphere trap is less efficient than the yellow rectangle.

At the beginning of July, hang traps at least 6 feet above the ground in a shady part of the tree. If husk flies were a problem the previous year, hang traps in trees that were infested.

The husk fly has few natural enemies. A predatory mite, Pyemotes ventricosus, and an anthocorid bug, Triphleps insidiosus, have been seen feeding on eggs. Ants and spiders reportedly prey on larvae and adults. However, these predators have little impact on husk fly populations.

Remove fallen infested fruit and remove the source of the infestation, probably a nearby walnut tree. Apply an insecticide recommended for walnut husk fly that is also registered on peaches within 10 days after trap catches show a sharp increase over a 3-day period. This will usually be from late July to mid-August. Apply again in 10 days if the husk fly was a problem the previous year. A third application may be needed 3 to 4 weeks later if flies continue to be caught in traps. A protein bait can be used to attract the flies to the insecticide to make it more effective.

Because some pupae remain in the ground for more than one year, flies may continue to appear after the source is removed and control may be needed over several years.