Who are the Key Natural Enemies in Washington Pear Orchards?

The Trechnites wasp (Trechnites insidiosus or T. psyllae) is the most common parasitoid of pear psylla in the pacific northwest.  These wasps are important because they are a true specialist of pear psylla and are active early in the season.  Unlike predators, Trechnites wasps do not feed on other pests or fellow predators in orchards systems. The only goal of these wasps is to parasitize new psylla hosts and reproduce.  In unsprayed orchards, the rate of psylla parasitism by Trechnites can exceed 70%, in an organic orchard this rate can be as high as 50%.  If excluded, we lose a valuable component of the natural enemy community.

Deraeocoris brevis piceatus is an abundant predator found in Pacific Northwest apple and pear orchards. They overwinter as adults and have multiple generations per year. Deraeocoris tends to emerge from winter quarters in March. For more information.

Anthocoris spp are particularly well adapted for feeding on pear psylla and can play a major role in the biological control of this pest. Anthocorids overwinter as adults (multiple habitats). They have multiple generations per year and tend to be active very early. They have a strong preference for psyllids. They are common outside of orchards and have a strong preference for trees and shrubs such as willow, alder, poplar, bitterbrush (Horton 2017). For more information.

Campylomma verbasci (Miridae; mullein bug) Generally thought of as a pest in apple, campylomma is an omnivore that also consumes large amounts of pests in pear orchards including aphids, psylla and other soft-bodied arthropods. It overwinters in an egg stage (i.e., in apple wood) and has multiple generations per year. It is common outside of orchards in herbaceous plants (i.e., mullein) and woody plants.

Brown lacewings (Hemerobius spp.) Brown lacewings are an important predator of aphids, psylla and mites and can become abundant where soft IPM programs are used. They overwinter in a mix of stages and have multiple generations per year. They are among the earliest of our predators. For more information. 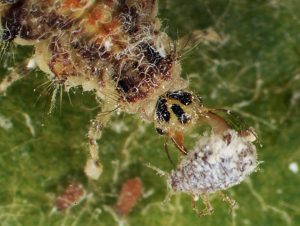 Green lacewings (Chrysoperla carnea, Chrysopa nigricornis) Green lacewings are good predators of aphids and to some extent psyllids. They overwinter as adults. They are fairly early to emerge post-winter with larvae present from late June to early September. They are common outside of orchards on many plants both woody and herbaceous.

Often thought of as a pest, the European earwig is an important predator in pear and apple orchards feeding on aphids, pear psylla, mites and insect eggs.