With the 2021 growing season, and the record-breaking high heat that it brought to the entire Pacific Northwest in the rearview mirror, orchard managers, packers, and WSU researchers have begun to assess the impact of the extreme temperatures on WA 38 apples.

Prolonged sunlight and excessive heat (above 114-120°F) exposure can damage apples (Rackso and Schrader, 2012). Photo-oxidative sunburn happens when the fruit experiences a shock exposure to visible light and the light bleaches the peel. Generally, the symptoms appear as a bleached halo around a brown blotchy area. This is temperature independent and can even occur when the air temperature is less than 64°F (18°C), but typically more severe expression is observed when reflective cover is applied at higher air temperatures. In WA 38, symptoms of sunburn might differ from other cultivars. Hanrahan and Torres (2020) developed a detailed WA 38 defect guide to help identify defects, including sunburn damage. The defect rotator index on the WSU Tree Fruit website also has a helpful series of photos that display a progression of symptoms of sunburn damage. (WSU Tree Fruit 360 Defect Rotator).

After record-high summer temperatures and a delayed hot spell when temperatures started to cool down in early fall, a different expression of sunburn damage was reported in WA 38 orchards where silver ground cover material was deployed (Figure 1-4). Other sunburn damage observed in WA 38 in 2021 include photo-oxidative sunburn (Figure 2 and 3), and sunburn browning and cracking (Figure 4). 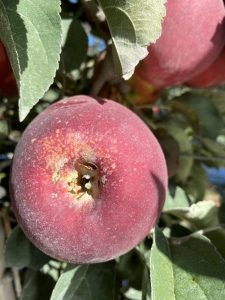 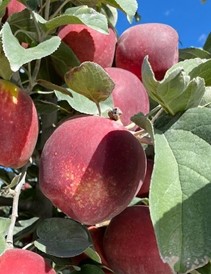 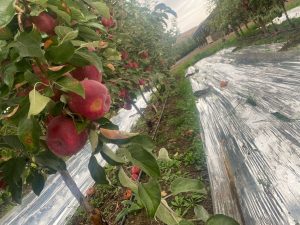 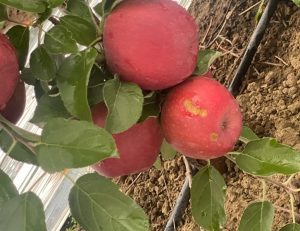 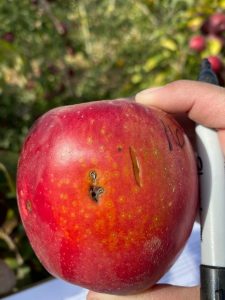 These sunburn symptoms were observed in orchards where silver reflective ground cover, commonly used to improve red color development on apples, was deployed during mid-September when temperatures were still above 85°F. Reflective ground cover material in combination with standing water on top of the cover appears to intensify the sunlight and heat effect. While reflective materials can be effective in maximizing light penetration and distribution, it can also reflect heat onto the apple surface. Delaying the installation of the silver mulch when temperatures become cooler (below 85° F) might prevent the risk of sunburn in WA 38. 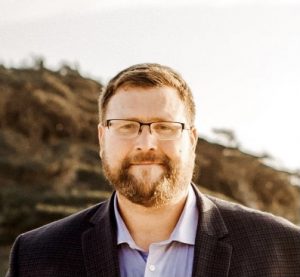