Sunburn is a physiological disorder caused by the exposure of the fruit to excessive high solar radiation and temperatures. It is irreversible and can cause more than 10% of losses in WA State. Some cultivars like Honeycrisp are more susceptible to sunburn. Low wind speed and humidity also contribute to the susceptibility to sunburn under high light and temperature conditions. In general, air temperatures above 90 °F is when sunburn risk substantially increases and when sunburn mitigation plans need to be implemented. Under extreme conditions that were present at the end of June (air temperatures exceeded 100 °F from 10:30 am to sunset for four days), multiple sunburn mitigation practices should be used.

What are the risks?

Depending on the factor or set of factors that caused sunburn, there are three types of sunburn that have been characterized and are summarized in Table 1.

What are the disorders produced or enhanced by sunburn?

Developing fruit are not able to dissipate excess radiation like leaves, hence fruit surface temperature (FST) can reach 10 to 15 °C (50 to 60°F) higher than air temperature.  To prevent sunburn in the fruits, there are strategies that can be used and are described below (Fig. 4) 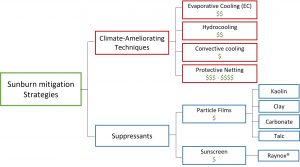