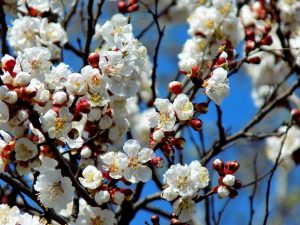 On March 27, 2020 Dr. Matthew Whiting presented a webinar on Flowering, fruit set, and pollination biology hosted by Ashley Thompson, OSU, and Bernardita Sallato, WSU. Topic covered included fundamentals of flowering and fertilization, pollenizers + pollinators, S-alleles and compatibility, and the latest research on environmental effects on flowering and practical strategies for optimizing fruit set. To view the recording of this webinar click here.

The following questions arrose during the discussion at the end of the presentation.

Flower “quality” is an ambiguous concept but it is known that winter chill will affect the final stages of floral development that occur during the dormant season, ovule function, and pollen viability.  This is not typically a concern in the Pacific Northwest of the U.S., where there is abundant chill.  In other regions, with low chill, the incomplete development of the ovules and/or poor pollen development may contribute to poor fertilization rates.

The earliest stages of growth, including flowering and budbreak, all rely upon carbohydrate reserves, so, yes, these reserves are important.  It is important to keep trees stress free in the postharvest period so they can generate sufficient reserves for the subsequent spring.

What if we have severe frost damage on our cherry buds and want to eliminate all flowers. How can we drop our crop, if they get set?

I am not aware of any product registered for this purpose.  In my research program, we are investigating post-bloom thinners for sweet cherry and have very promising results with a few plant growth regulators, but these are not registered for this application.  Check with your local field representative to see if there is something registered in your area.

How does the spur age and position affect fruit set?

There seems to be little effect of spur age per se on fruit set potential, provided trees are healthy and there is a good light environment throughout the canopy.  We tend to believe that older spurs have lower fruit set but typically this is an artifact of two conditions:  1) poor light levels in the canopy interior where these older spurs are and/or, 2) lower flower density in these spurs giving the appearance of low fruit set.  Generally, the spurs on two year old wood nearest the base of the 1 year old wood have the greatest density of reproductive buds per spur and therefore, often appear to have higher fruit set.  If a spur is 10 years old but in a good light environment on a healthy limb, fruit set can be high.

How does light penetration during the summer influence bud quality for the following year?

Good light distribution throughout a canopy is important for building reserves that are critical for flowering and early growth in the subsequent season.  There aren’t any empirical studies of light exposure and bud ‘quality’, but it is generally acknowledged that good light exposure is beneficial for spur leaves as flower parts are formed after harvest in the axillary reproductive buds.

What were the numbers/units for “standard” density and recently increasing density for bees per acre?

In Washington State, many growers have been using 4 to 5 hives per acre in recent years. This is an increase over the 2 hives per acre that were used previously.

In Europe blue orchard bees are used more and more to pollinize pears and apples. What do you think of using this instead of honeybees?

Have you seen that Black Pearl displays characteristics of being self-fertile?

No. Black Pearl has the alleles S4 S13. It is the S4´ allele that is self-fertile.

Can you discuss strategies for pollinating Early Robin that might be different from other hard to set cultivars? More hives/ac, higher pollinator density, the use of Retain?

Growers have always had difficulty in getting ‘Early Robin’ to set a lot of fruit, despite its abundance of bloom. This is due, in large part, to the rapid senescence of ovules, but can also be due to insufficient pollinator activity or poor bloom overlap with pollinizers. I recommend multiple pollinizer cultivars that provide complete bloom overlap with ‘Early Robin’. ‘Early Robin’ has the alleles S1 S3, so choose pollinizers that do not have these alleles for maximum pollinating potential. ‘Early Robin’ tends to bloom early in the season, so choose pollinizers that will bloom at the same time. ‘Lapins’ (S1 S4´) has been popular as a pollinizer in the PNW of the USA due to good bloom overlap, but it shares the S1 allele with ‘Early Robin’, so half of its pollen is incompatible. Applications of ReTain at 10-25% of full bloom have been effective for improving fruit set in ‘Early Robin’. In addition, artificial pollination treatments have also been effective for improving fruit set in ‘Early Robin’ (2 applications of 15-20g/acre).

Do you have an idea of why Benton is so unproductive?

Similar situation to ‘Early Robin’ (see above). In 2019 we did an artificial pollination trial in a commercial ‘Benton’ block and improved fruit set by ca. 30% with two applications of 40g/acre pollen.

Why Regina is so hard to set fruit? Can this be managed with supplemental pollination?

Similar situation as described above for ‘Early Robin’ and ‘Benton’. Yes, supplemental pollination trials in ‘Regina’ have been effective for improving fruit set. Again, I would recommend two applications, the first about 40-50% full bloom and the second closer to 75-80% full bloom.

Rootstock may influence fruit set, but other factors are more important (e.g., cultivar, weather conditions). Rootstock will affect tree vigor, flower bud density, and levels of plant hormones (and possibly nutrients) that can influence fruit set. It is clear that fruit yield efficiency is higher on precocious rootstocks like the Gisela series compared to standard rootstocks like Mazzard, but this is an effect of higher flower density on the Gisela rootstocks rather than greater fruit set.

What proportion of growers are using supplemental pollination?

Growers havie been using various supplemental pollination techniques for decades. These vary from pollen inserts at the hive entrance, to dusting pollen mixtures, to applications of liquid pollen suspensions. These tools are more widely adopted in sweet cherry, with perhaps 25% of the industry using some form (an estimate only, I don’t have data to support this).

Can wind replace the pollinators to make efficient pollination?

No. Wind will play no significant role in pollination of tree fruit crops like sweet cherry and apple.

Which components of pollination are most sensitive to climate change (changes in air temperature and precipitation), and how can adverse effects be best mitigated?

The weather during bloom will influence all aspects of pollination, but two are key: pollen tube growth, and ovule viability. Pollen tube growth is positively related with temperature (i.e., pollen grows faster as temperatures increase), whereas ovule viability is negatively related with temperature (i.e., ovules last longer in cooler temperatures). Combined, these two key components comprise the effective pollination period, which is the difference in ovule longevity and the time required for pollen to reach the ovule. Climate change will also affect the timing of bloom, potentially leading to greater susceptibility to spring frost, and a lack of bloom overlap between the main cultivar and pollinizers.

Any threat of spreading viruses via the commercially-gathered pollen from pollen companies?

Yes, there is, but there are diagnostics tests that companies can run on pollen samples to check for the presence of viruses. Check with your pollen supplier to see how often they test their pollen and where they have the tests run.

In the supplemental pollen applications. Were the 20 g and 40g/acre rates applied twice? or are those rates the total applied (i.e. the rates were 10g/acre and 20g/acre per application?)

The trial results I showed were from experiments where 2 applications were made of two pollen rates (20 g and 40 g/acre). Total pollen application in this trial was therefore, 40 g and 80 g/acre. Our first application is usually targeted at near 50% full bloom and the second is made near 75-80% full bloom.

Does the spraying pollen on require an electronic charge sprayer or will just a regular sprayer work?

Our research suggests that electrostatic application is important. The positively-charged droplets will be attracted to the negatively-charged stigmatic surface for improved deposition.

When hand-pollinating, when is the best time of day to apply pollen?

We have not evaluated this specifically. I don’t believe that time of day will have a dramatic effect on hand-pollination success. It will likely be more important to select flowers at the most receptive stage. This is typically 1 day after they open.

Purchased pollen viability: How is it measured what type of shelf life and best use recommendations?

Pollen viability is usually determined with germination tests on an agar medium in a lab environment. Pollen samples are dusted over the media and the percent of germinated grains is assessed 8 – 10 hours later. There are other techniques for determining pollen viability, but the agar germination test is reasonably reliable, inexpensive, and relatively quick.
Pollen should be kept in a freezer and away from moisture for maintaining high viability.

When pollen has been frozen, is there a protocol to how much time should be allowed before applied?

If kept frozen, in the original packaging, the pollen can last for years without losing much viability. To maximize viability, keep the pollen cool and dry until mixing it for application. Once it is mixed in the liquid media for application it needs to be applied immediately. In the liquid suspension, pollen will lose viability over time – the average window of optimum pollen viability is about 90 minutes.

Does the product called Retain help extend the pollination period during hot weather?

Yes, by extending the viability of the ovule, the effective pollination period is longer when ReTain is applied.

What is warm weather? What temperature is best for AVG (ReTain)?

ReTain is most useful during warm weather since higher temperatures accelerate the senescence of the ovule, reducing effective pollination period. You should consider using ReTain if temperatures during key stages of bloom will be greater than 70 F. Our results suggest that using single applications at the highest labeled rate can be most effective when applied at early stages of flowering (e.g., 10-50% bloom).

So, you don’t think there’s merit using ReTain at the maximum rate (2 packages/each one is 333grams) per acre? Especially when we have a fast bloom in sweet cherries?

We have trial results that indicate two applications can be effective, and an improvement over a single application, but the majority of our research has suggested that a single, high rate of ReTain is sufficient, even during rapid bloom.

Does Retain work with tart cherries too?

Yes, I believe ReTain has been shown to improve fruit set in Prunus cerasus too.

Did you also test Harvista (1-MCP) to increase fruit set?

No, we have not. This requires specialized spray equipment.

Do apples have a similar allele system to cherries? are some apple varieties incompatible with others?

How much of this is applicable to apples and pears?

Most of what was discussed is applicable to apple and pears. The components of effective pollination period, compatibility, and environmental effects on fruit set are very similar for sweet cherry, apple, and pear.