Bacterial canker in sweet cherries is caused by the bacterium Pseudomonas syringae pv. syringae (PSS) van Hall (Romoli, 1963, Latorre et al., 1980), and is commonly associated with production areas characterized by wet and cold weather such as western Washington, Oregon, southern Chile, among others (Latorre, 2008). In the arid sweet cherry producing region of eastern Washington, bacterial canker was long considered of secondary importance. However, in recent years, the disease has been observed more frequently, especially in newer plantings. Tree losses of up to 75% have previously been reported (Cameron, 1970), with up to 60% incidence (proportion of trees affected) in 2021, in young orchards in WA. The apparent increase in disease levels observed in WA can be attributed to several factors, with the seemingly most evident being the high susceptibility of the cultivar ‘Coral Champagne’. Released in 1984, ‘Coral Champagne’ has been gaining popularity over the last decade in WA and was the third-leading cultivar ordered in 2012. Additional factors influencing bacterial canker infection include extreme weather conditions and irrigation practices. For example, in 2021, a frost event with temperatures below freezing impacted many tree fruit orchards in eastern WA during the month of April, followed by cool and wet conditions, ideal for P. syringae growth. Record high temperatures in June that continued throughout the summer lead to additional plant stress and increased susceptibility to infection. The presence of other diseases, such as Little Cherry Disease (LCD) or Verticillium Wilt can further predispose trees to infection by PSS. This article responds to the needs of many WA growers for additional information on bacterial canker caused by PSS and provides an overview of the disease, management practices for WA sweet cherry growers, and guidelines to better diagnose the disease and prevent confusion with other threatening diseases affecting WA sweet cherry industry.

Bacterial canker disease in sweet cherry is caused by the bacterium Pseudomona syringae pv. syringae and can infect numerous species including tart cherry, peach, plum, berries, and many weeds found on orchard floors. Additionally, P. syringae can form ice inside the plant cell and generate damage, called ice nucleation activity (INA; Lindow et al., 1978). Pathogen colonization can occur on any plant tissue without provoking infection or symptoms (Kennelly et al. 2007). Infection requires a wound or a natural opening accompanied by wet conditions or standing water. In infected trees, PSS survives in cankers and buds, which are the primary sources of inoculum for initial infections in the following growing season. PSS populations increase during spring after bud break and symptoms of infection develop over the spring and summer. In late summer, PSS populations decline; however, there can be a second spike of infection during the cooler, wetter conditions of autumn.

PSS can be transmitted by grafting and can translocate systemically throughout the plant. Vigorous rootstocks have a greater chance of root grafting and transmitting PSS to surrounding trees than dwarfing and semi-dwarfing rootstocks. The pathogen can also be dispersed and disseminated by wind, rain or irrigation water, and insects. PSS bacteria can be washed and transported by water droplets. Mechanical movement throughout pruning appears not to be of risk, but should not be overlooked if the equipment is in direct contact with fresh gummosis and conditions are favorable (i.e., cool and wet).

PPS requires a wound or other opening to enter the plant and initiate infection, thus, any condition that damage the tree, will increase the risk of infection. Bacterial canker is highly associated to winter freezes and spring frost events. Trees damaged by extreme weather conditions will have wounds that, when exposed to water (rain or irrigation) and cool temperatures (between 59 and 77 F (15 – 25 C)), are ideal conditions for infection to occur. Thus, PSS infection is most likely during the winter, spring or fall, however symptoms are commonly observed between spring and summer. In WA, most infections have been associated with heading cuts (during planting in the spring) that become exposed to irrigation water and cold temperatures. Freeze or heat damage in the trunk, pest wounds (e.g., deer and rodents), or mechanical wounds create favorable infection sites. Fresh leaf scars due to abscission in the fall, or by hand removal in the base of the new planted trees can also increase infection risk.

While all sweet cherry cultivars and rootstocks can get infected by PSS, some cultivars have been shown to be more susceptible than others.  In WA, the cultivars Sweetheart, Bing, Staccato, Royal Ann (Napoleon), and Van are susceptible while Coral Champagne has been shown to be highly susceptible. Higher levels of resistance have been reported in Corum, Regina, Moreau, Lambert, and Sam (Junior 2002, Spotts et al., 2010). Rainier has contradicting results but might be somewhat resistant in certain environments (Spotts et al., 2010, Roche, 2001, Mgbechi-Ezeri et al., 2017, Johnson et al. manuscript in preparation). Among the rootstocks, Mazzard and Colt seems to be more resistant, while more dwarfing rootstocks are more susceptible, e.g. Gisela 6 and Krimsk 5 (Spotts et al. 2010).

The most distinct symptoms of infection in sweet cherry is a dark canker sometimes accompanied by gummosis (reddish-brown exudate) (Latorre, 2008, CABI, 2020; Figure 1). New limbs can die back, affecting buds or newly developed blooms that remain attached to the spur (Figure 2 – 3) (Moore, 1988, CABI, 2020). Infection is more common in young trees, although it can occur in trees at any stage of development if conditions are favorable. Reddish, malodorous lesions in the root cortex are indicative of infection by PSS (CABI, 2020). Symptoms commonly develop at the base of trees, an area that, in young trees, receives higher exposure to damage by machinery, rodents, frost, and irrigation, providing numerous opportunities for PSS infection to occur. Note that there are other conditions that can lead to gummosis in sweet cherry. Generally, noninfectious gummosis is clear to amber color, thus diagnosis usually requires expert assessment or laboratory testing. 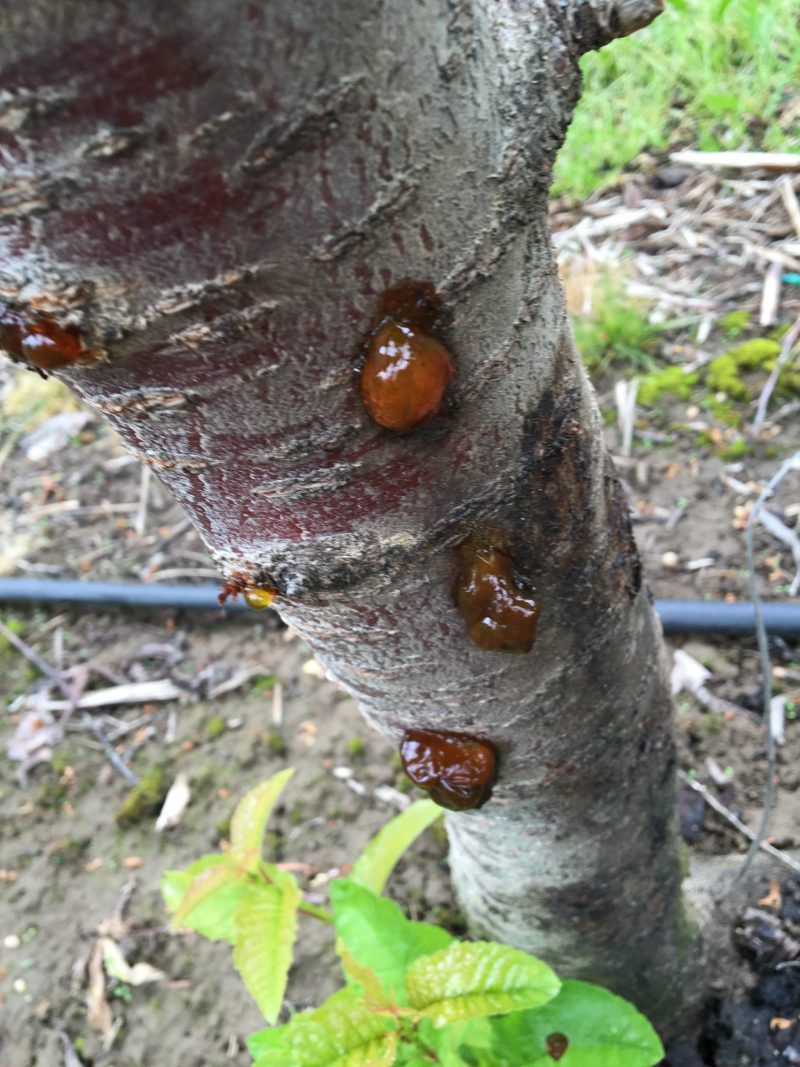 Figure 1.a Gummosis due to bacterial canker in a broken branch of sweet cherry (photo: B. Sallato). 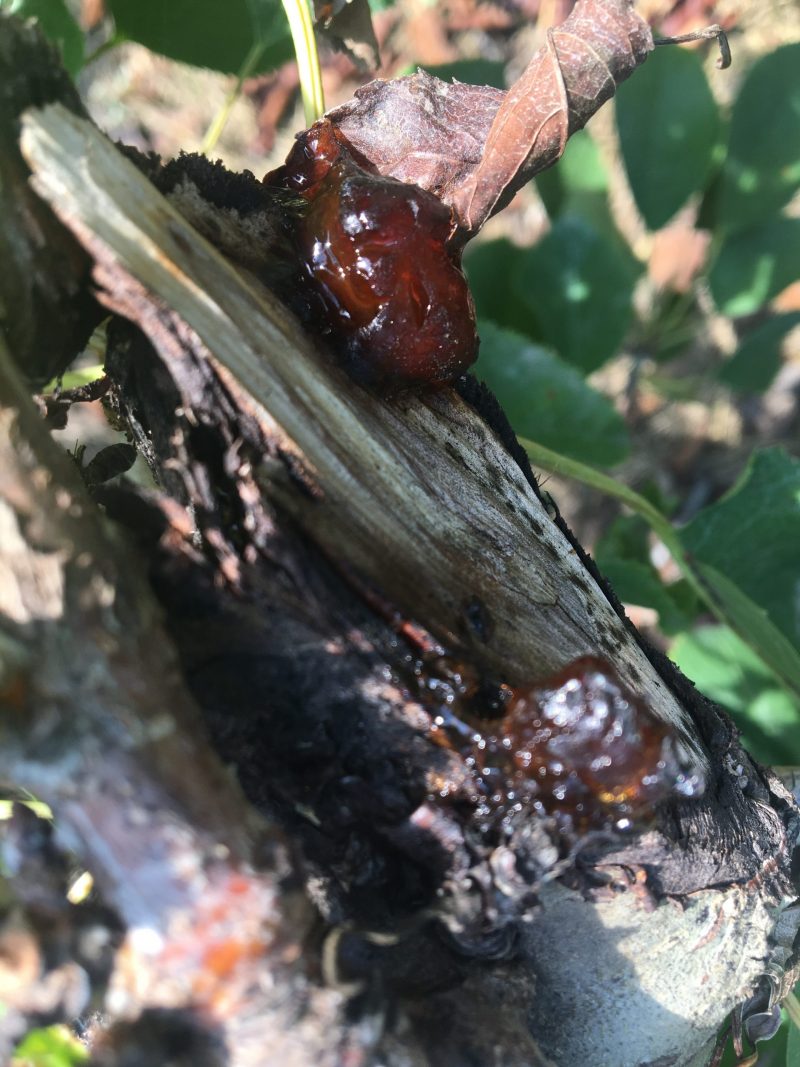 Figure 1.b Gummosis due to bacterial canker in a broken branch of sweet cherry (photo: B. Sallato). 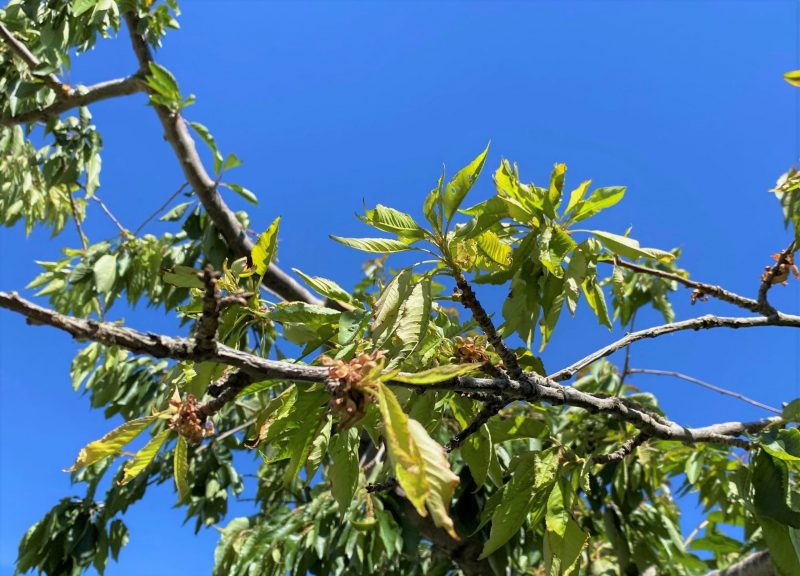 Figure 2. Limb with canker and dead flower buds that remain attached to the limb. (photo: B. Sallato) 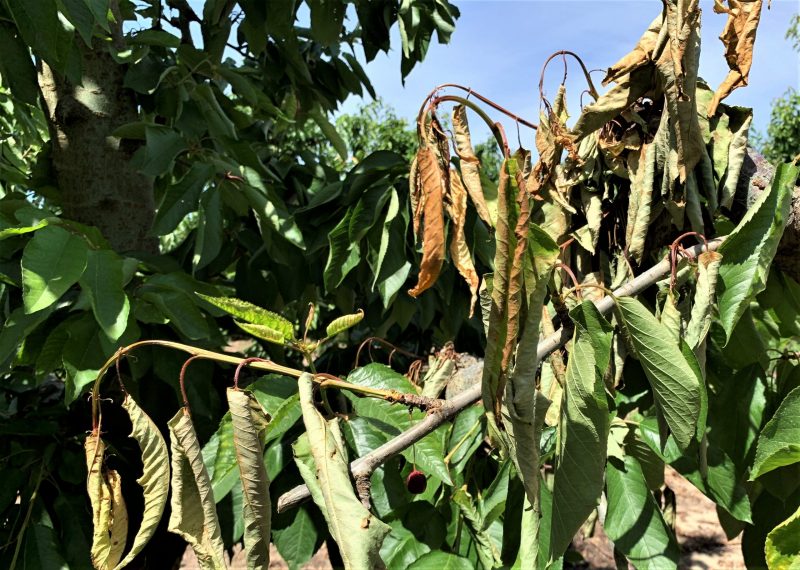 When PSS infects the trunk or main leaders, it can create a girdle (Figure 4), weakening the whole tree or branches distal to the canker and inducing symptoms that are similar to water stress or nutrient deficiency (e.g., chlorosis, small leaves, small fruit, and tree death; Figure 5). Thus, PSS infection can be confused with other abiotic and biotic (e.g. Leucostoma canker) conditions that have the same symptoms. Additional symptoms of PSS infection are necrotic tissue beneath  the bark, with a defined reddish-brown pattern that affects the vascular system. This necrosis can be observed by cutting the bark and wood tangentially with a clean, sharp knife. 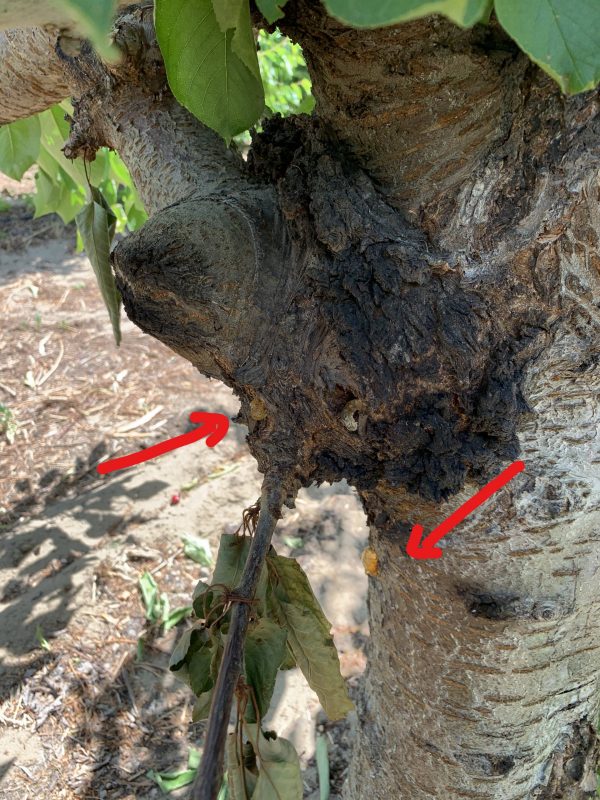 Figure 4. Canker and callus developed in the lower part of the tree creating a girdle. Gummosis are present below the canker and include a weak limb with wilted leaves. 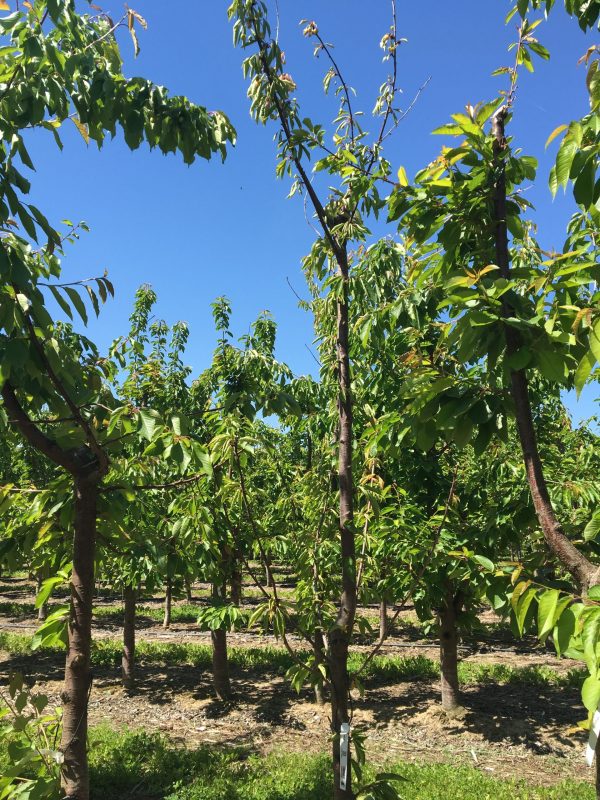 Figure 5. Sweet cherry tree infected by P. syringae generating a girdle in the main leader and weaking the tree. Symptoms can be confused with water stress or advanced decline due to little cherry disease, other viruses, and Leucostoma Canker.

Weak trees or limbs that have been girdled as a result of bacterial canker infection do not always appear with gummosis or signs of infection in the upper portion of the trees. Instead, these weaker limbs will have reduced water and nutrient uptake, leading to small fruit and yellowing leaves. Due to the high incidence of Little Cherry Disease (LCD) in Washington cherry orchards, caused by little cherry virus 1 (LChV1) and/or little cherry virus 2 (LChV2), as well as X-disease caused by Candidatus Phytoplasma pruni, symptoms can be confusing. Symptoms of LCD and X-disease are distinct when fruit is present, with mature, ripe fruit of adequate size present on the same limb or spur as unripe, small, and yellow fruit (Figure 6). Small fruit associated with bacterial canker infection are uniformly similar in size and color throughout the entire affected limb or tree (Figure 7). Additional symptoms such as cankers, gummosis, scars in the trunk, or overall tree decline can help distinguish between the diseases. Ultimately, testing for LCD, X-disease, or bacterial canker should clearly distinguish between pathogens. Bacterial canker is also sometimes confused with Leucostoma Canker (also known as Cytospora Canker) which is caused by the fungus Leucostoma cinctum. Cankers produced by L. cinctum tend to have a well-defined margin.  The canker surface can also contain minute, pimple-like structures known as pycnidia; the spores that spread the disease in orchards are produced in these structures.  Note that it is also possible to have multiple diseases in one tree. 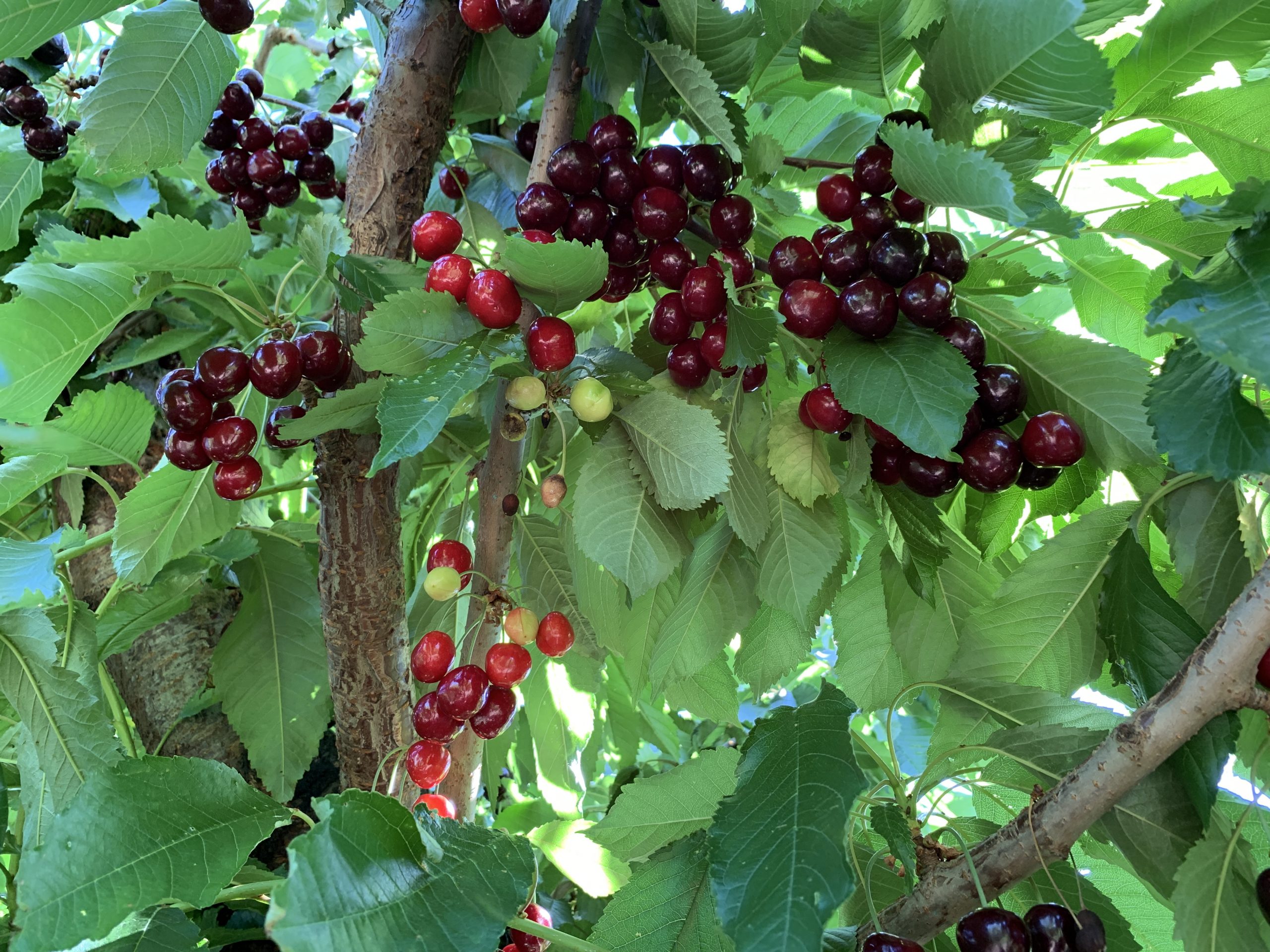 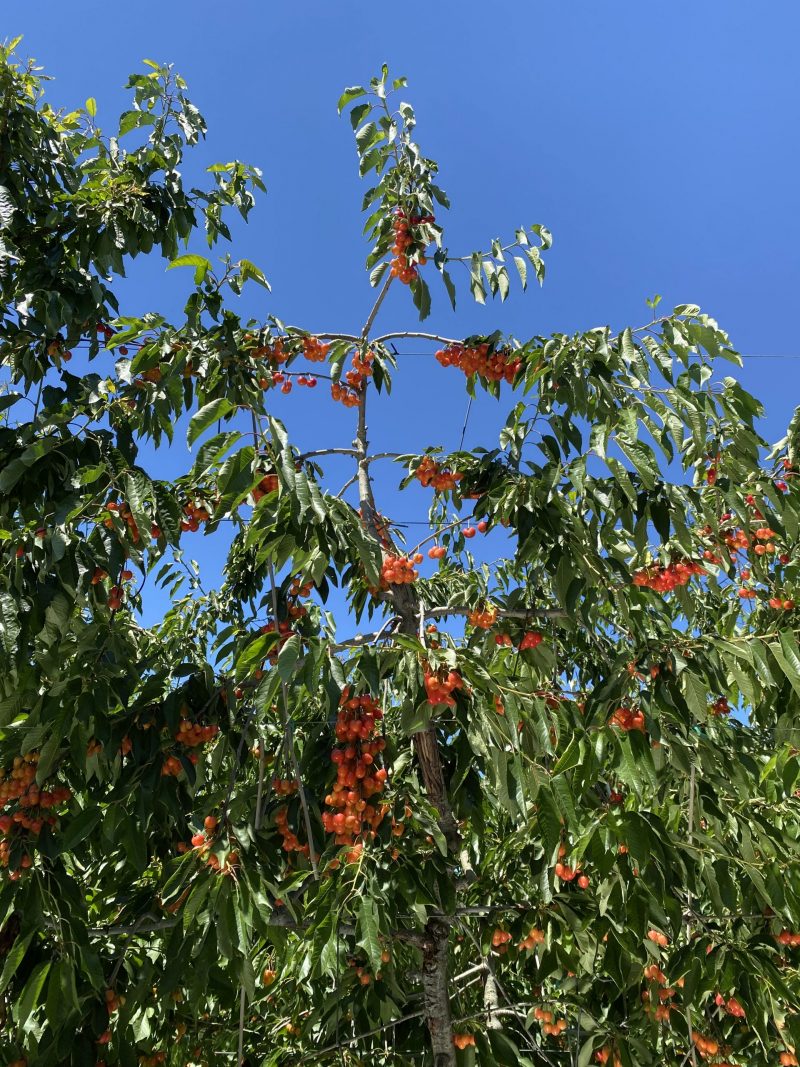 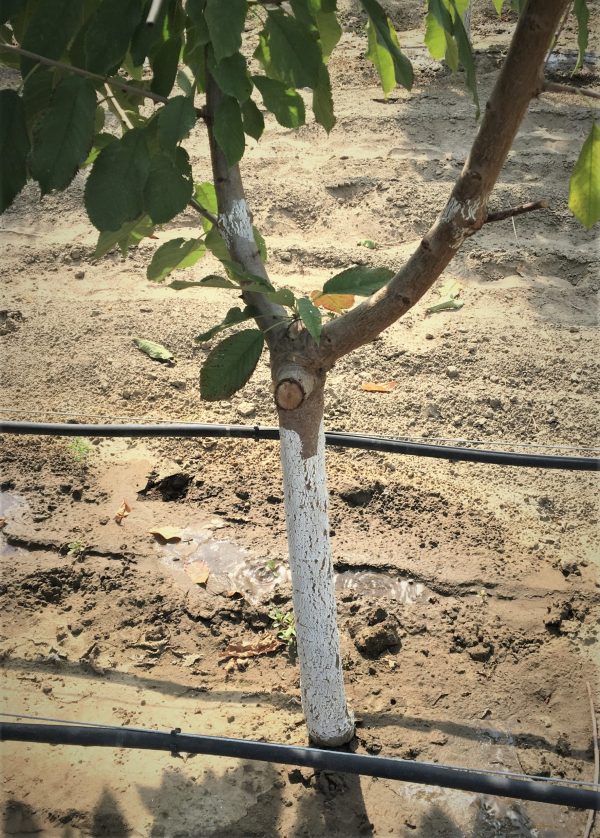 If P. syringae infection is present in the tree, control of the infection and spread can be done by:

When using pesticide products, always read and follow all label instructions. Do not apply copper products after full bloom (Foss and Antonelli, 2012). Note that there are reports of resistance of P. syringae to copper and antibiotics in Oregon (Pscheidt and Ocamb, 2021). Poor control can be due to resistance to pesticides, poor chemical coverage, inadequate timing, and/or high pressure of disease caused by PSS in the orchard.

Much of the infection and high incidence of bacterial canker around the world is closely related to high frost risk areas (southern Chile, Canada, WA, OR), thus control has been mostly directed to frost management (Lindow, 1983). The prospect of cellulose nanocrystals to protect wood and buds against frost damage might offer additional tools to prevent bacterial canker in sweet cherry orchards (Whiting, personal communication).

Roche MM. 2001. Development of an in vitro and modification of an in vivo bioassay to screen cherry genotypes for response to inoculation with Pseudomonas syringae pv. syringae. Thesis. Oregon State University.

Reviewed by Rachel Bomberger. Use pesticides with care. Apply them only to plants, animals, or sites listed on the labels. When mixing and applying pesticides, follow all label precautions to protect yourself and others around you. It is a violation of the law to disregard label directions. If pesticides are spilled on skin or clothing, remove clothing and wash skin thoroughly. Store pesticides in their original containers and keep them out of the reach of children, pets, and livestock. YOU ARE REQUIRED BY LAW TO FOLLOW THE LABEL. It is a legal document. Always read the label before using any pesticide. You, the grower, are responsible for safe pesticide use. Trade (brand) names are provided for your reference only. No discrimination is intended, and other pesticides with the same active ingredient may be suitable. No endorsement is implied.