Blue mold is the most important postharvest disease of apples and pears worldwide and in the Pacific Northwest (Amiri and Ali, 2016; Rosenberger, 1990). Some strains of the blue mold causal fungus, Penicillium expansum, secrete patulin, a mycotoxin with mutagenic, neurotoxic, and gastrointestinal effects (Ramalingam et al., 2019). Therefore, blue mold is an economic concern not only to the fresh-fruit industry, but also to the fruit-processing industry since Penicillium contamination can result in patulin concentrations higher than the 50 µg/kg (ppb) limit in apple and pear processed products.

Blue mold of apples and pears is thought to be mainly caused by Penicillium expansum,  although several other Penicillium species such as P. solitum, P. commune, P. verrucosum, P. chrysogenum and P. regulosum, have also been reported to cause blue mold decay. Although the growth of Penicillium spp. is limited in cold storage, the fungus can grow at temperatures as low as -3ºC (27ºF) and germination can occur at 0ºC (32ºF) (Rosenberger and Xiao, 2014).

Blue mold originates primarily from wounds, such as punctures, splits, bruises and limb frictions, infected by Penicillium spp. At early infection stages, blue mold symptoms include light tan to dark brown circular lesions with very sharp margin between diseased and healthy tissues (Fig 1A-C). The decayed tissue is medium-soft and watery. Decayed tissue can be readily separated from the healthy tissue, leaving a “bowl-like” cavity (Fig. 1D). Green spore masses may appear on the decayed area, starting at the infection site. As the decayed area ages, green spores may turn blue giving the common name of “blue mold” to the disease. Decayed fruit has an earthy, musty odor. Blue-green spore masses (Fig. 1G) on the lesion and the associated musty odor are diagnostic of blue mold. When decay has fully developed and the lesion softens, green-blue spore masses may be less apparent and blue mold can be misdiagnosed as Mucor rot. However, Mucor rot is characterized by a sweet odor and usually softens much quicker than blue mold (Table 1). Blue mold can also originate from infections through the stem bowl (Fig. 1E), where potential openings may have been caused by stem removal or through cracks and splits that are common on cultivars such as Gala and Honeycrisp. Calyx-end blue mold (Fig. 1F,I) may occur as a result of fruit drenching or in some cases due to core rot spreading to the surface of the fruit. 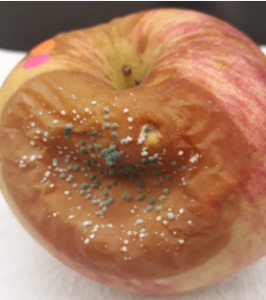 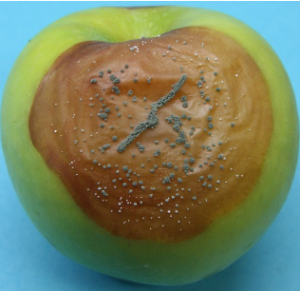 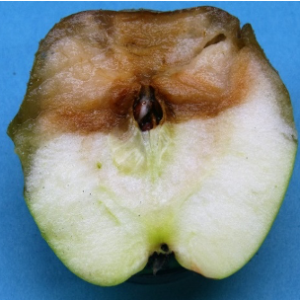 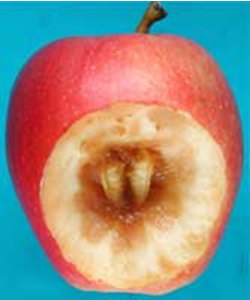 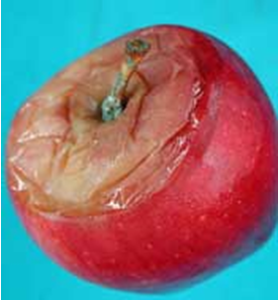 1E. Blue mold originating from infection at the stem or stem-bowl area of a Red Delicious fruit. 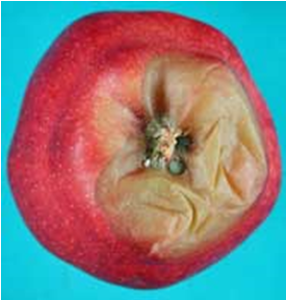 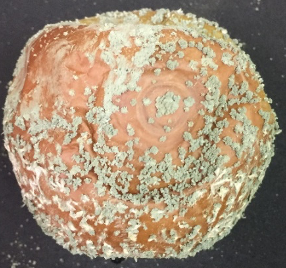 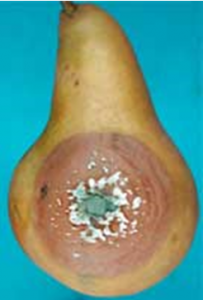 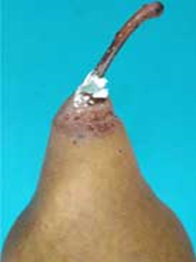 1I. Stem-end blue mold on a Bosc pear fruit after an extended period of storage.

Penicillium spp. are typical postharvest pathogens, and although some inoculum can be found in orchard soils and on organic debris on the orchard floor, fruit are seldom infected by Penicillium while on the tree. Penicillium survive easily as airborne spores in storage room air, walls, floors and bins. When bins are immersed in dump-tanks, large amounts of spores can be released into the water and carried out in flume water infecting additional fruit on the packing line. Infections may spread through extended storage, especially for packers who pre-size and store wet fruit (Amiri and Bompeix, 2005; Sanderson and Spotts, 1995). Infection by P. expansum may start immediately after harvest on fresh wounds caused during picking and handling (Amiri and Bompeix, 2005). These lesions will develop slowly in cold storage and may produce large amounts of spores that are air-disseminated by continuous fan movements during storage to infect additional fruit, air, walls and bins. Infections by Penicillium occurring through lenticels are rare but possible, especially as the fruit over-mature and lenticels may breakdown. On rare occasions, remaining infected parts of flowers can serve as a source of inoculum of Penicillium and other pathogens to infect seeds inside the fruit that may cause “core rot” later in storage. Although certain cultivars such as Honeycrisp and Gala may seem more susceptible to blue mold infections, all current commercial apple and pear cultivars are susceptible to blue mold, especially through wounds.

However, because postharvest environments create more favorable conditions for infections and decay development, mainly due to high humidity levels, postharvest sanitation practices have a greater impact on blue mold control. It is important to clean and sanitize rooms (air, walls, floors) and bins at least once a season before using them to store a new crop. Sanitation of the packing-line from the dump-tank all-the-way to the sorters needs to be done regularly during the packing season. Several sanitizers, i.e. chlorine and chlorine dioxide, hydrogen peroxide, organic aids, electrolyzed water and ozone, are available and all have different efficacies and uses (Bernat et al., 2018; Feliziani et al., 2016). It is recommended to consult extension specialists or consultants in your area and the product labels to optimize sanitation. Recent cold or hot fogging technologies have shown good levels of efficacy in sanitizing larger facilities (entire rooms, lines, stacked bins) more efficiently.

With current absence of resistant strains these four fungicides have a high level of efficacy against blue mold, with fludioxonil shown to have the highest efficacy. For decades, postharvest fungicides have been applied as a drench at harvest or as a spray on the packing-line. However, in recent years, thermonebulization (also called fog or aerosol or dry application) has become common in the PNW pome fruit industry. One of the advantages of fog application is that it reduces the spread of spores between bins compared to when non-sanitized bins are used for drenching. Although fog application still requires more optimization for other diseases, it has been shown to have a better efficacy against blue mold compared to drenching. Formulations to apply thiabendazole, pyrimethanil , and fludioxonil through TNB exist already, whereas difenoconazole’s dry formulation is pending. Besides these four single-site fungicides, captan, a multi-site fungicide, is also registered for postharvest application. Its efficacy is fair and may help for short-term storage and for managing fungicide resistance development. Postharvest fungicides should be applied soon after harvest because the more time that elapses after harvest, the higher the risk for decay to develop in storage.

Table 2. List and efficacy of postharvest fungicides registered to control blue mold and other decay rots.

Penicillium expansum is considered to have a medium to high risk for fungicide resistance development. Because the fungus sporulates profusely, there is a risk that many spores will be exposed to the applied fungicide which increases the risk of selecting for resistance. Resistance to  thiabendazole has been reported in the PNW (Li and Xiao 2008) and elsewhere. In Washington State, frequencies vary between packers based on the usage frequency. Resistance to  pyrimethanil (Penbotec) has been found to range between 0 and 50% in Washington (Caiazzo et al., 2014, Amiri and Pandit, 2019) whereas 5% to 10% of the population showed tolerance to fludioxonil  (Scholar) (Amiri and Pandit 2019). Given the known risk and the limited number of postharvest fungicides available, it is critical that these materials are used appropriately to limit the development of fungicide resistance. Knowing what type and level of resistance in each warehouse is the first step in developing an effective spray program. WSU researchers (Contact Dr. Amiri) can help with conducting a risk assessment. The second step is to implement sound annual cleaning and sanitation to remove or reduce the residual inoculum from previous seasons. It is critical to apply a different FRAC group for postharvest treatments each season. Although resistance to thiabendazole has been documented, 50% of PNW packers can still use this fungicide if they follow good sanitation practices. It is recommended not to apply  thiabendazole (FRAC 1) postharvest if Topsin-M (FRAC1) was used preharvest. The two most effective fungicides  pyrimethanil (FRAC 9) and fludioxonil (FRAC 12) can be alternated on a yearly basis. In some cultivars, known to be susceptible to bull’s eye rot (BER), is recommended to apply FDL with  thiabendazole to improve control of BER. Academy (DIF + fludioxonil) has shown high efficacy levels against blue mold after seven months of cold storage (Ali and Amiri 2018; Jurick et al. 2018). In Washington State, Academy can be applied via drench at harvest given that packers follow specific fungicide waste management practices (https://agr.wa.gov/wastepesticide). A formulation for a dry application of Academy is under development. For other states and regions, please contact your local agencies for additional information. For organic packers, there are not many options to fight blue mold postharvest. Sanitation is more critical when growing, storing and packing organic fruit. A recent study has shown that a combination of peroxy-acetic acid and hydrogen peroxide applied at 50 fl oz/100 gal via dip was effective in controlling several postharvest diseases.

Amiri A., and Pandit LK. 2019. Fungicide resistance in Penicillium expansum from pome fruit in the U.S. Pacific Northwest. Phytopathology 109-10: S2.75.

Ali EM., and Amiri A. 2018. Selection pressure pathways and mechanisms of resistance to the demethylation inhibitor-difenoconazole in Penicillium expansum. Frontiers in Microbiology 9:2472.

Feliziani E., Lichter A., Smilanick JL., and Ippolito A. 2016. Disinfecting agents for controlling fruit and vegetable diseases after harvest. Postharvest Biology and Technology 122:53-69.