Gray mold is a common postharvest disease on apples and pears wherever the fruits are grown. This disease can cause significant losses in both apples and pears during storage with losses as high as 20-50%. Recent surveys in the Pacific Northwest showed gray mold to be the second most important postharvest decay after blue mold (Amiri and Ali, 2016).

Gray mold is mainly caused by Botrytis cinerea Pers., (sexual form Botryotinia fuckeliana (de Bary) Whetzel) although other B. mali has also been reported. Botrytis is a ﬁlamentous necro-trophic (can survive on dead tissue) fungus that can infect more than 200 plant species. This wide host-range is due to a very plastic genome and diverse species with varying virulence and pathogenicity. Botrytis cinerea is thermo-tolerant able to grow at temperatures as low as -2ºC (28ºF) and germinate at 0ºC (32ºF) (Coley-Smith et al., 1980; Rosenberger and Xiao, 2014). Its growth significantly slows down at temperatures above 32ºC (90ºF). Wet conditions during the growing season can be very conducive for Botrytis infections (Sommer 1985).

Symptoms of gray mold include a decayed area with a light brown to dark brown appearance across which the color remains similar. The decayed fruit is spongy, and diseased tissue does not separate from the healthy tissue as dies blue mold(Table 1). The internal decayed flesh usually has irregular margins and appears light brown to brown at the margin (Fig. 1C). Under high relative humidity conditions and as storage extends, fluffy white to gray mycelium and grayish spore masses may appear (Fig 1G,H). During early infection gray mold-infected fruit does not have a distinct odor, but as the decay advances, rotten fruit may have a “cedar-like” smell and the entire decayed fruit may appear “baked” and eventually may turn softer compared to earlier stages. Early symptoms of gray mold can be confused with those of speck rot on apple and Phacidiopycnis rot on pear. Speck rot is usually firmer than gray mold and the fruit flesh at the margin of speck or Phacidiopycnis rot appears translucent and water-soaked, whereas internal decayed flesh of gray mold usually appears brown. 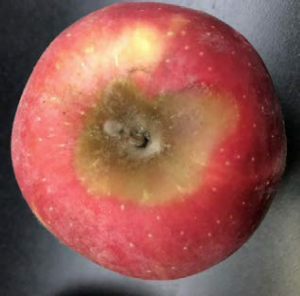 1A. Gray mold at the stem-bowl of a Gala. Decayed area brown and spongy to firm. 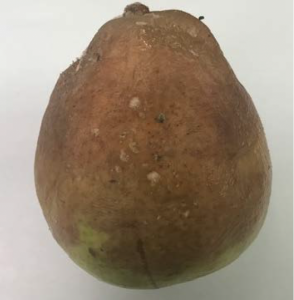 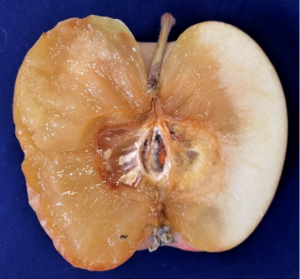 1C. Internal view of a Fuji apple tissue infected by gray mold. Note the irregular margin and decayed tissue does not separate from healthy tissue. 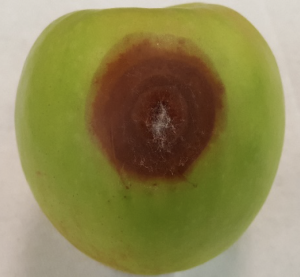 1D. Gray mold originating from a side wound infection of a Granny Smith. 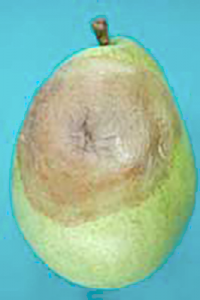 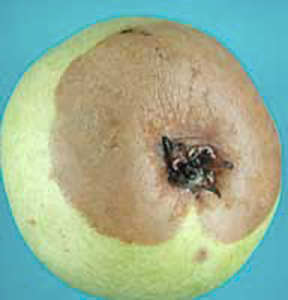 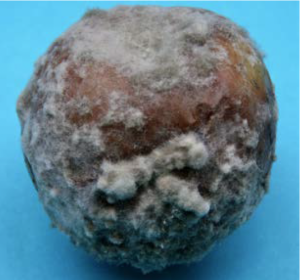 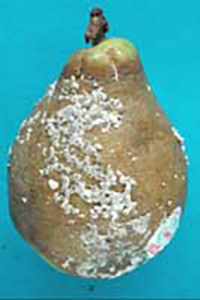 1H. Sclerotia of B. cinerea formed on the surface of a decayed d ‘Anjou fruit at advanced stage. 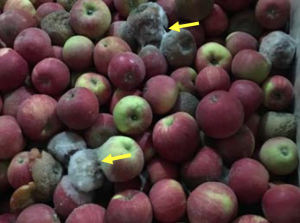 1I. Nesting of gray mold due to fruit-to fruit spread on Honeycrisp in storage. Notice white to gray mycelium.

Infection and Life Cycle of the Organism

Inoculum of Botrytis can survive on organic matter in the orchard or in mummies left on trees or fallen to the ground. Under certain unfavorable conditions, such as very low or very high temperatures, Botrytis may produce sclerotia that will allow it to survive until conditions improve. When temperatures become moderate mycelia grow from the sclerotia and sporulate. The resulting fungal spores are disseminated through wind, water splash, or infected materials entering the orchard. Although Botrytis, like many other pathogens can easily infect fruit through splits, wounds or punctures occurring at harvest, gray mold infections generally start earlier in the orchard. The fungus can infect flowers at bloom and fruits during the growing season. Infections remain latent (dormant) until fruit have been in storage for several months, and then develop symptoms. Spores of Botrytis are common on the stems and in the calyx bowl and commonly cause infection in these areas. (Fig. 1A,B,F). Secondary infections of fruit through fruit-to-fruit contact (nesting) during storage is common,(Fig. 1I) especially when fruit were not fully covered with the fungicide applied at harvest and when under high relative humidity. Eventually latent infections may be carried in packed fruit and symptoms may develop during transit or at grocery stores.

Since most Botrytis infections occur in the orchard, sanitation practices include removing decayed or mummified fruit and organic debris from the orchard floor to reduce inoculum loads preharvest. This will reduce the number of infected fruits and hence limit gray mold development in storage. Moreover, good harvest and handling aimed to minimize punctures and bruises on the fruit will further limit the infections that may occur through wounds. Certain cultivars that tend to split such as Gala and Honeycrisp need to be harvested at the right maturity to minimize splits at the stem bowl, and a good fungicide coverage should be achieved to ensure enough fungicide is available to prevent infections through splits. Clipping the stems of certain cultivars such as Honeycrisp will minimize injuries and reduce infections.

Because Botrytis survives and infects fruit in the orchard, applying effective fungicides in a timely manner is key to reducing infections before harvest. Recent research has shown good efficacy in reducing gray mold with four preharvest sprays a season applied at: (1) at bloom or at petal fall to reduce the number of spores on flowers and fruit, (2) at fruitlet stage (1.5-2 inch diameter), (3) mid-July followed by (4) a final spray 7 days before harvest. It is highly recommended to rotate fungicides from different FRAC groups (Table 2) to avoid fungicide resistance.  The most effective preharvest fungicides include those from FRAC 1, 7, 9 11, and 17 (pear). Other multi-site fungicides, such as Ziram and Captan, are good rotation or tank-mix partners to improve efficacy and reduce fungicide resistance. At harvest, there are four single-site postharvest fungicides labeled for postharvest application (Table 2). Thiabendazole (e.g. Mertect) has been largely used in the PNW since the 1970s until early 2000s when two new postharvest fungicides, fludioxonil (e.g. Scholar) and pyrimethanil (e.g. Penbotec) were registered for postharvest decay management. In 2016, difenoconazole (eg. Academy difenconazole + fludioxonil) was registered for postharvest application in pome fruit and other commodities. In orchards with no resistant populations, the four labeled fungicides have a high level of efficacy against gray mold, with pyrimethanil being the most effective due better systemic activity. For decades, postharvest fungicides have been applied as a drench a harvest or as a spray on the packing-line. However, in recent years, thermonebulization (also called fog or aerosol or dry application) has become common in the PNW pome fruit industry. Although fog application may be more effective in reducing the spread of Penicillium and Mucor spores better compared to drenching, it still requires some optimization for preharvest pathogens like Botrytis. Formulations to apply thiabendazole, pyrimethanil, and fludioxonil through fog application exist already, whereas difenoconazole’s dry formulation is pending. Postharvest fungicide must be applied as soon as possible after harvest. The longer the time after harvest, the higher the risk for decay to develop in storage.

Table 2 List of preharvest and postharvest fungicides registered to control Botrytis-gray mold and other decays on pome fruit.

Botrytis cinerea is considered a high-risk pathogen for fungicide resistance development. The plastic genome and the profuse sporulation of the fungus increase the risk that many spores will be exposed to the applied fungicide, which increases the risk of selecting for resistance. Therefore, the first important step in limiting fungicide resistance is to implement sound annual preharvest sanitations (mummies and leaf litter removal, weed management) to remove or reduce the residual inoculum from previous seasons and limit exposure to fungicides. Extended storage periods, for up to 12 months, can also increase the risks of fungicide resistance development because of the continuous exposure of the fungus to the fungicide. Resistance to both active ingredients of Pristine (pyraclostrobin and boscalid), the most frequently used preharvest fungicide, has been reported in Washington (Kim and Xiao, 2010) and confirmed in recent surveys (Amiri, unpublished data). For postharvest fungicides, resistance to TBZ has been reported first in 2010 in the PNW (Zhao et al., 2010) and recent surveys found about 20% of the overall statewide population was resistant to TBZ as well as to Topsin-M (Amiri, unpublished data). Resistance to PYR (Penbotec) has also been found in recent surveys to range between 0 and 40% in Washington (Amiri et al., 2019) whereas some Botrytis populations showed tolerance to FDL (Scholar) (Amiri, unpublished data). Given the known risks and the limited number of fungicides available preharvest and postharvest, it is critical that these materials are used appropriately to limit the development of fungicide resistance development. Growers should rotate fungicides from different FRAC groups (1, 3, 7, 11, 19) used to control powdery mildew in the early growing season and other pathogens later in the season. It is highly recommended not to apply TBZ (FRAC 1) postharvest if Topsin-M (FRAC 1) has been applied preharvest. At the time of harvest, it is critical to apply a different FRAC group each season to break down the fungicide resistance selection cycle. The two most effective fungicides PYR (FRAC 9), and FDL (FRAC 12) can be alternated on a yearly basis. Academy (DIF + FDL) has shown a good efficacy against gray mold after 6 months of cold storage (Amiri and Pandit, 2019). In Washington State, Academy can be applied via drench at harvest as long as packers follow specific fungicide waste management practices (https://agr.wa.gov/wastepesticide). A formulation for a dry application of Academy is under development. For other states and regions, please contact your local agencies for additional information. Although resistance to most fungicides has been documented, our recent surveys have shown that a larger portion of our growers and packers are still under the threshold of resistance that may cause a control failure. Recent surveys showed that resistance frequencies vary between growers and packers based on the usage frequency. It is, therefore, recommended to investigate what levels of resistance occur at each facility to choose appropriate fungicides.

Amiri A., and Ali. MD.E. 2016. Prevalence of storage decays of apple: Lessons from the 2016 statewide survey.http://treefruit.wsu.edu/news/prevalence-of-storage-decays-of-apple-lessons-from-the-2016-statewide-survey/

Kim YK. and Xiao CL. 2010. Resistance to pyraclostrobin and boscalid in populations of Botrytis cinerea from stored apples in Washington State. Plant Disease 94:604-612.

Zhao H., Kim YK., and Xiao CL. 2010. Resistance to thiabendazole and baseline sensitivity to fludioxonil and pyrimethanil in Botrytis cinerea populations from apple and pear in Washington State. Postharvest Biology and Technology 56:12-18.