WA 38 is an apple cultivar developed and released by the WSU apple breeding program and first introduced to the market in December of 2019. During the first two commercial seasons fruit developed excessive skin greasiness, which was hard to handle by some warehouses. To better understand the severity of the greasiness issue and document the various ways that warehouses are managing affected fruit, a survey was developed to document their quality information and postharvest protocols.  The survey was answered by 8 warehouses, equivalent to 14,625 bins (25% of total WA 38 projected volume) during the 2020/2021 season. Skin greasiness was observed at harvest and throughout storage. Higher severity was more frequently associated with higher starch index values at harvest in a lot-dependent manner. 1-MCP was not able to reduce greasiness development postharvest, which may (or may not) also be related to the young age of the trees. Over 90% of respondents used carnauba-based coatings, which is not recommended for grease fruit due to its permeability to natural wax components. In fact, if the natural wax is not removed properly, it leads to a ‘bad waxing job’, uneven and patchy wax application. Fruit finish and high-quality fruit is key to assure recurring purchases (and prices)​, therefore, special attention should be given to the packaging process in WA 38 apples, ensuring that greasy lots are waxed properly with a suitable coating.

Skin greasiness on apples is an undesirable quality at retail. It can develop any time from harvest and throughout the cold chain. Many economically important cultivars including Jonagold, Cripps Pink, Granny Smith, Honeycrisp, and newer club cultivars are prone to develop this fruit defect when control measures are not taken or available.  Greasiness is influenced by cultivar, tree age, growing climate (seasonal variation), harvest maturity, and storage temperature and atmosphere, and can be reduced by optimum harvest maturity, and CA storage protocols and treatments (1-methylcyclopropene; 1-MCP), as well as proper post-storage coatings (Curry, 2008; Fan et al., 1999; Veraverbeke et al., 2001).  Nevertheless, even when coatings are used to limit the condition, apples may still become greasy during longer duration cold chains, severely impacting quality on the retail shelves.

Advanced maturity at harvest is known to promote greasiness during storage. With young trees and variable crop load, in the case of WA 38, there is a higher probability of mixed maturity at harvest, for which average maturity indices may not adequately account for the variability. As trees mature, along with good horticulture practices, vigor and crop load uniformity within blocks will stabilize and overall fruit quality improve (including greasiness and physiological disorders expression).

After concerns were raised from warehouses experiencing issues related to excessive greasiness on WA 38 apples, we initiated a survey to warehouses packaging of WA 38’s 2020 crop. The objective of the survey was to assess how widespread and severe the issue was and to document and understand the varying protocols for dealing with greasy apples at packing.

The survey (Table 1) was sent out to packers between January and April of 2021. Included in the survey was specific protocol details including dump tank and transfer tank water temperature, type of soap, brush bed speed setting and wax type used. We also requested information related to the orchard, such as block location, bloom and harvest dates, maturity indices at harvest and any post-harvest application of 1-MCP.

Skin greasiness was rated on a 0-3 scale using the following criteria:

None (0): Finger slides on apple surface with no resistance. May make an audible squeak if pressure is great pressure is applied.

Moderate (2): Considerable resistance and persistent tackiness that lingers on the finger.

In addition to the survey, a small fruit sample from six lots were randomly picked at a single warehouse. Greasiness level was evaluated pre (n=8-10) and post packaging (n=8-10).

The survey was answered by 8 warehouses, equivalent to 14,625 bins, representing approximately 25% of the total Washington State WA 38 production (estimated at 60,000 bins) during the 2020 season.

The average packout was 71.1% (considering 25 packs per bin) ​for all surveyed volume. Nevertheless, 19% of it had more than 80% packout, which is similar (82%) to the average from 2nd and 3rd– year crop of the first commercial season (Torres and Gomez, 2020; http://treefruit.wsu.edu/article/WA 38-storage-and-packing-observations-cs1/).

The average harvest maturity was 17.0 Lbs. of flesh firmness, 13.9 Brix of soluble solids, 2.9 of Starch Index (1-6, WA 38 starch scale: http://treefruit.wsu.edu/WA 38-starch-scale/), with fruit picked, in average, at 172 days after full bloom (DAFB). Fruit firmness showed a slight declined as harvest date (DAFB) increased. No trend was observed in the case of SI (Fig. 1).

As it was during the first commercial season, mechanical damages (stem punctures, limb rubs) were the top 2 defects, followed by splits (Fig. 2).

Fruit from growing areas represented by 82% of the surveyed lots had some degree of greasiness with no clear trend on severity between them (Fig. 3). The remaining 18% did not respond the question. 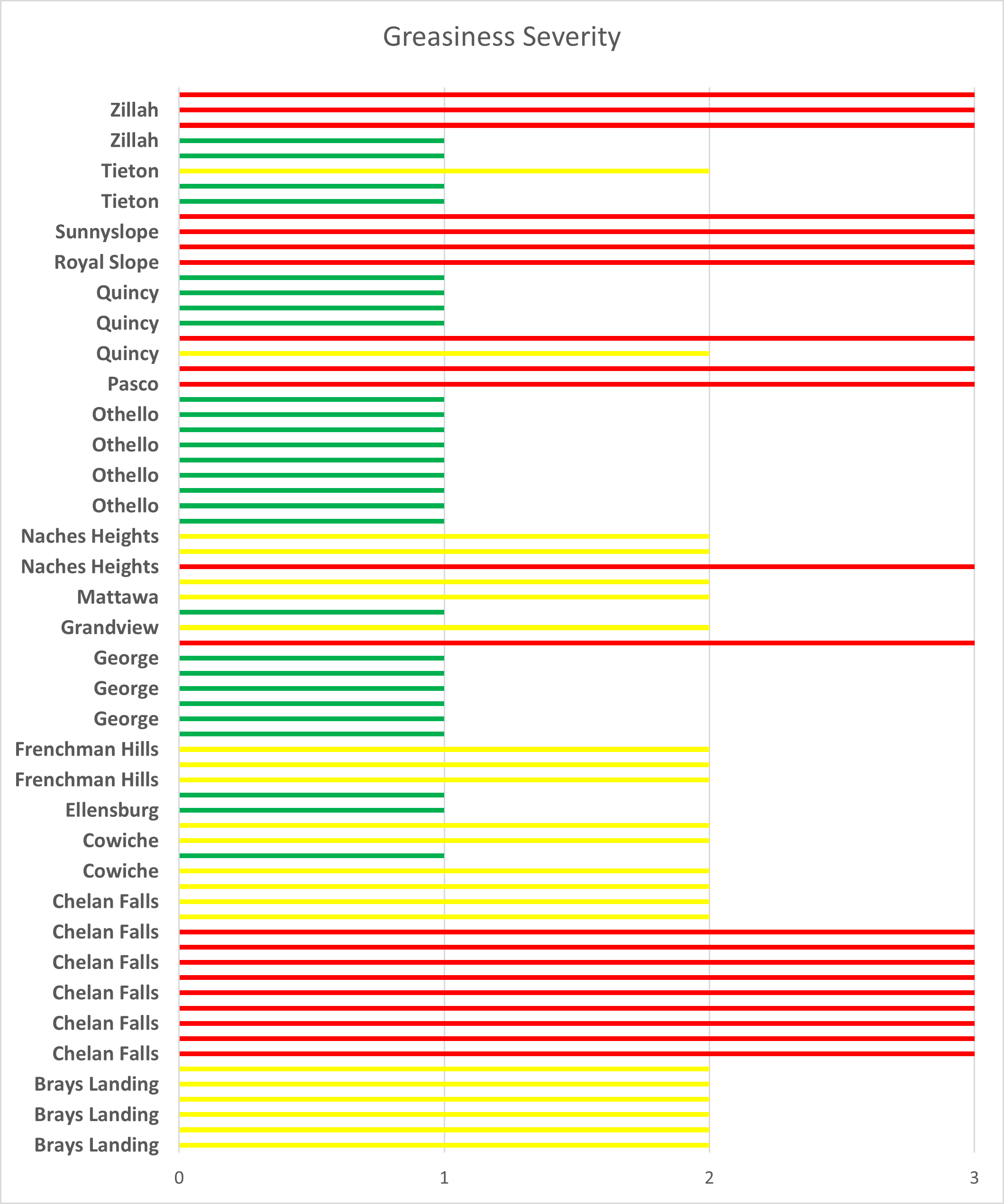 Overall, fruit greasiness severity was not associated with fruit firmness at harvest (Fig. 4) but tended to be more severe in fruit harvested with higher SI, despite being lot-dependent (Fig. 5).  The latest is the main maturity index used for this cultivar today (The Harvest Criteria). For WA 38 2021 harvest, the recommendation is 1.5 – 4.5 starch index for RA and short-term CA storage for less than 4 months.

In addition, fruit harvested with less that 165 DAFB was found to have no greasiness, the opposite was true for fruit picked with more than 165 DAFB, except for one lot (Fig. 6, left). On the other hand, greasiness severity was not correlated with time in storage (Fig. 6, right).

Postharvest, greasy fruit was reported from 1.5 months into cold storage until 7 months later with no association with severity of this condition (Fig. 5).  Although most of the lots were treated with 1-MCP (76.5%), greasiness was present with all severity levels as in non-treated lots (23.5%) (Fig. 7).

There was no correlation found between grease incidence and dump and transfer tank temperatures, pH level, soap type, brush bed setting and line speed. Carnauba was the wax type used on over 90% of the reported lots. 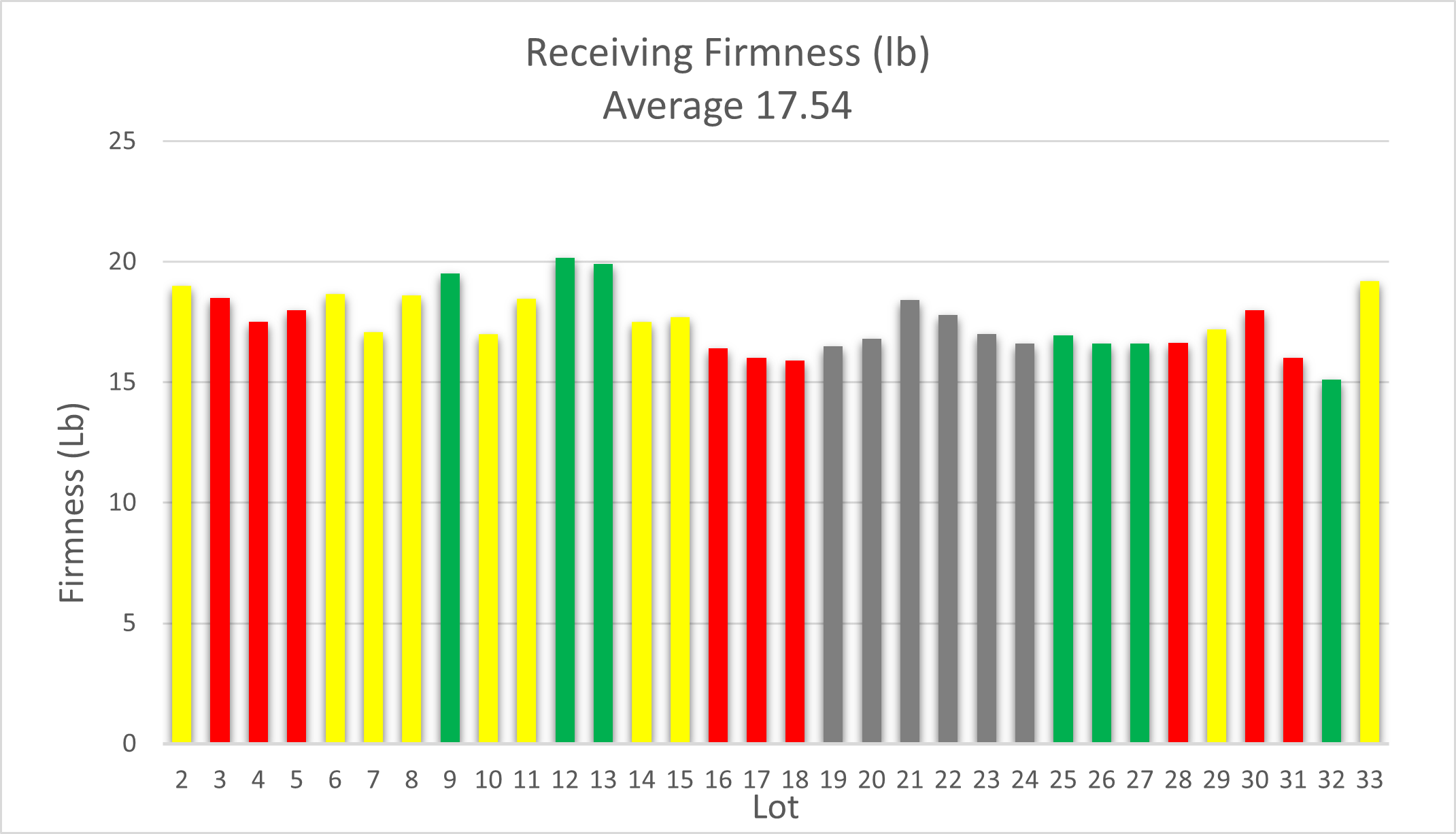 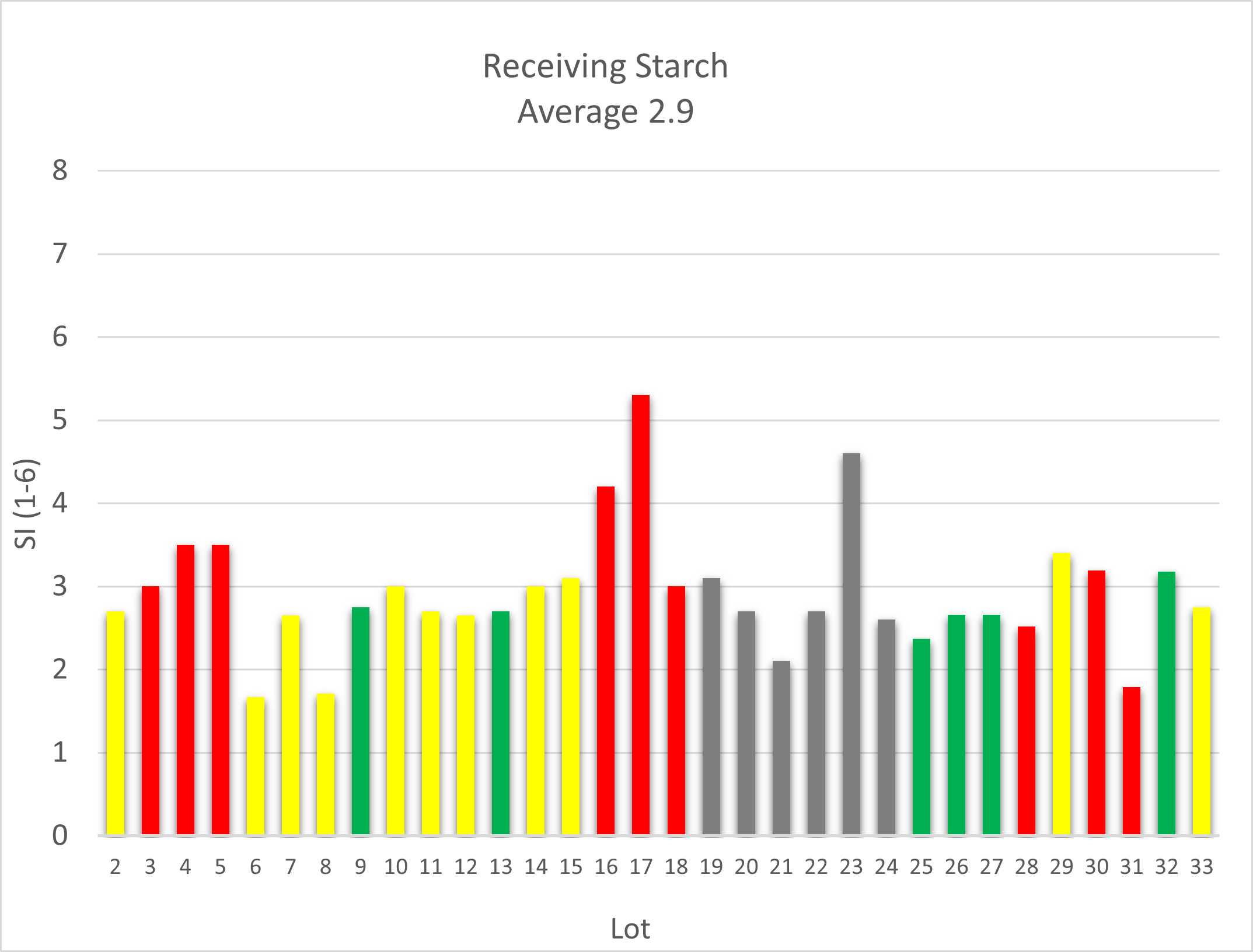 Figure 6. Relationship between fruit greasiness at harvest and days after full bloom (DAFB)(left), and greasiness at the time of packaging relative to days in storage (right). Data based on all survey respondents, WA 38 second commercial season, 2020-2021. 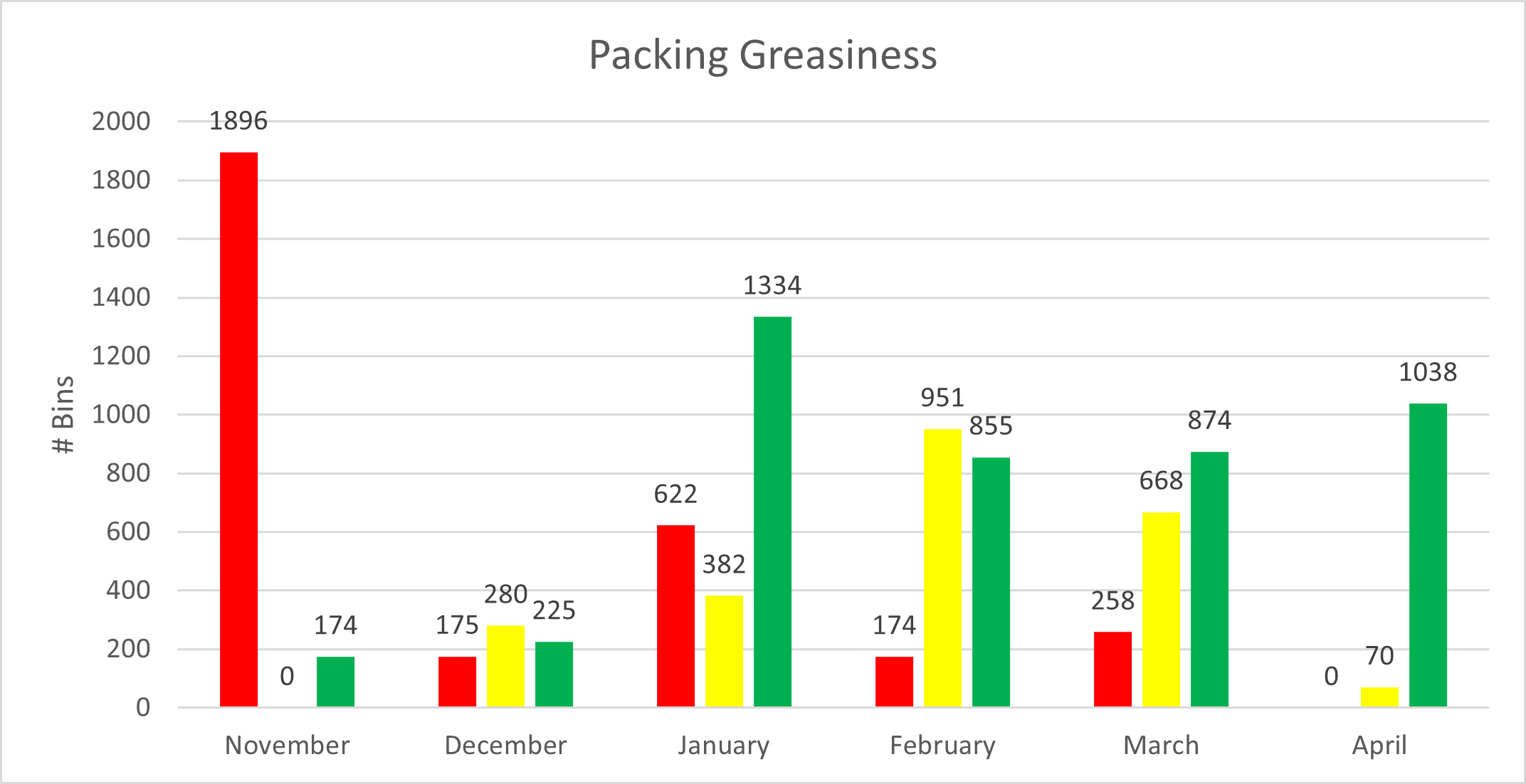 Figure 7. Greasiness severity at the time of packaging during the storage season. Data based on all survey respondents, WA 38 second commercial season, 2020-2021. 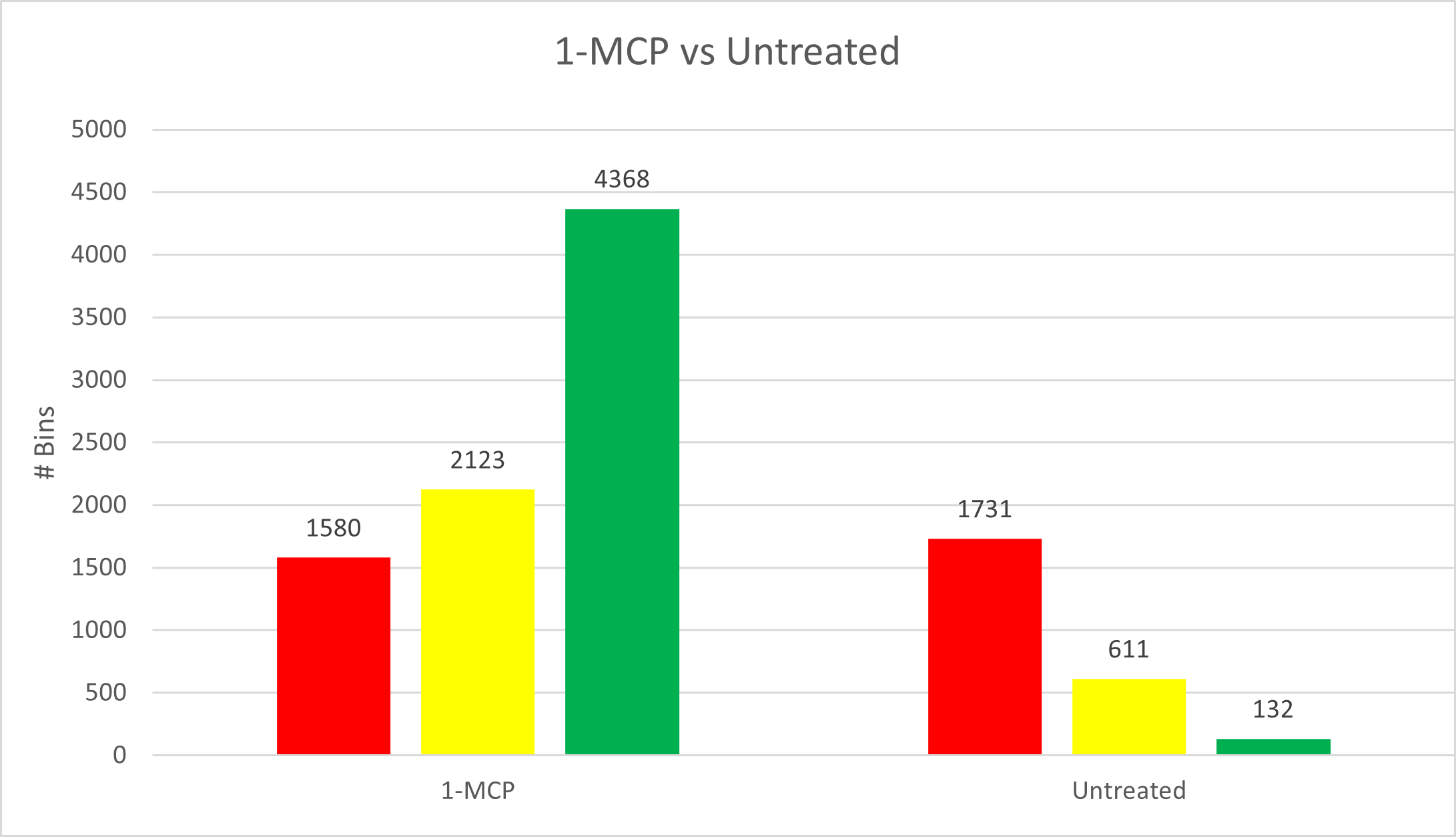 From the visual evaluation of fruit coming from different lots being processed at a single warehouse, greasiness was evident in all of them prior packaging (Fig. 9, top). The same lots after packaging showed various degrees of greasiness (Fig. 9, bottom) and fruit finish, evidencing problems with the natural wax removal and coating used (carnauba), which translated into patches of tackiness, dullness, and shininess (Picture pane: 2, 3, 4). 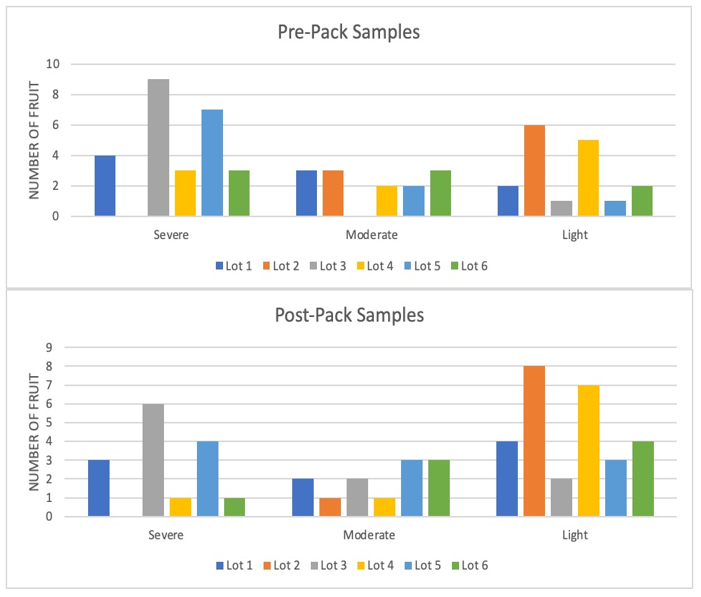 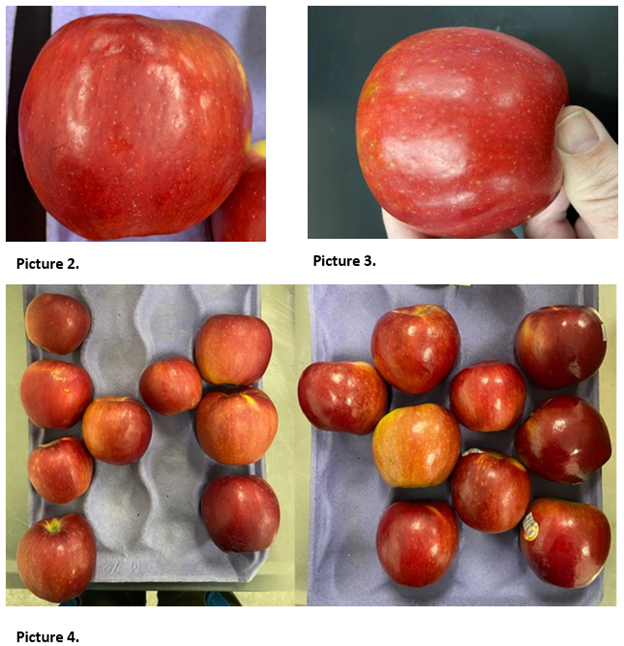